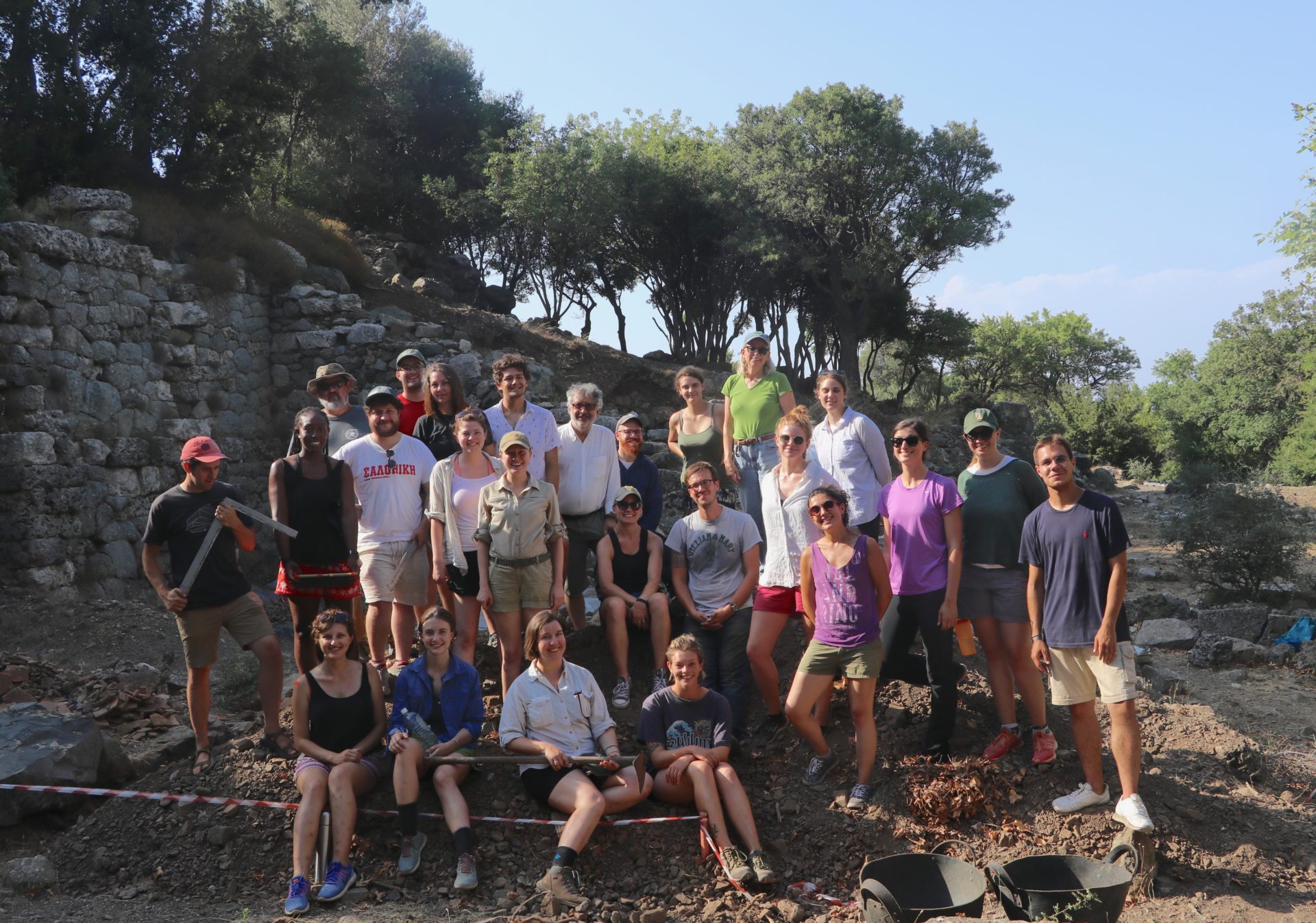 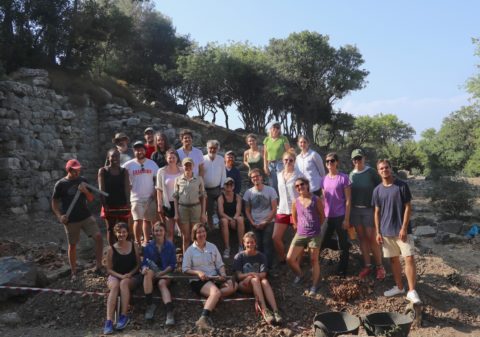 In accordance with permission granted by the Ephorate of Antiquities for Evros and under its supervision, excavations in the Sanctuary of the Great Gods in Samothrace were carried out by the American team under the auspices of the American School of Classical Studies at Athens and sponsored by Emory University and the Institute of Fine Arts, NYU.[1] Preliminary preparations and architectural research began on June 24th, 2019; excavation and site management were conducted from July 1st to August 9th, 2019. Excavation concentrated in the area of the Central Ravine, Area K, and the Area South of Stoa. Publication research centered on the monuments in the western region of the Sanctuary anchored around the famous Winged Victory: the Stoa, Nike Precinct, and Theater.

Excavation in the Area of the Central Ravine

Excavation in the area of the Central Ravine aimed to determine the position of the ancient Hellenistic and Roman channels controlling the central torrent, in the area between the Altar Court and Hall of Choral Dancers, and the area west of the Rotunda of Arsinoe (called in the 19th century, the “Pont Génois”).

Our major trench (SGG.CRav.1) encompassed an area where sections of Roman concrete known to the Austrian excavators in 1873 had been again revealed by the 2017 flood. We uncovered major sections of collapsed Roman concrete walls from both the east and west sides of the channel, covering almost the entire area of the trench. Further, we were able to document the foundations of the Hellenistic boulder retaining wall along the west side of the ancient channel, on top of which the Roman concrete wall was constructed. Remnants of the concrete wall along the eastern edge of the ancient channel lay in fall position, where it had collapsed into the bed of the channel. The evidence indicates that the ancient channel was further west of the modern ravine channel in this region.

In the trench sited along the southern face of the “Pont Génois” west of the Rotunda (SGG.CRav.3), excavation revealed the cross-section of the ancient retaining walls. Here, the Roman concrete wall is built against the face of the Hellenistic boulder retaining wall, creating a thick buttress that served as the support for a bridge across the channel in this area.

The destruction pattern witnessed in the ancient concrete rubble walls in both areas closely resembles that witnessed of modern construction in the 2017 storms, both in the largescale toppling of sections of wall into the streambed, and the scouring of earth behind the retaining walls, leaving deeply eroded channels.

We opened three trenches. Trench SGG. K.3, which included the area uncovered during earlier excavations, encompassed the area defined on the south by the east-west Roman retaining wall, and to the east by the Hellenistic/Roman retaining wall for dining room L. It was extended to the north and west to include an area roughly 5.5 m. by 3.25 m, with extensions to the west on both side of a large boulder resting on the slope. We uncovered evidence of seven stairs, as well as an east-west retaining wall, ca. 4.0 m north of the first step. We cleaned and further articulated the remains of two north-south running retaining walls that had been partially uncovered in 1969. At the close of the 2019 excavation, we understand three construction phases. The first late Classical/Hellenistic construction phase produced the two southernmost steps as well as an east-west running retaining wall revealed in the northern scarp. The northern five steps constructed of reused limestone and rhyolite blocks belong to a second phase. It is not yet clear if these stairs, as well as a course of stones abutting the northern retaining wall, were built on and around the large-scale cobble and boulder collapse that continues in the scarp to the west. A third phase is represented by the walling off of the passage and the construction of the east-west Roman concrete retaining wall, making the stairs unusable. Work in this trench will continue in 2020.

Trenches SGG.K.1 and SGG.K.2, to the north of SGG.K.3, were devoid of ashlar architectural remains, indicating that the stairs in SGG.K.3 did not continue in that area.

Oval structure in the Area South of Stoa and Nike Precinct

Of the extensive archaeological remains on the hillside to the south of the Stoa and Nike Precincts, two major features, an oval construction and a boulder retaining wall, are within the modern boundaries of the Sanctuary. Here, we aimed to determine the date and function of these structures, as well as their relationship to the Nike Precinct and to later building activity in the region. During the 2019 field season, we cleaned the oval structure of cobbles, boulders, and humus, stopping at a level that may represent a floor. The structure was surveyed and recorded photogrammetrically. This area will be the focus of further investigation in the 2020-22 field seasons.

In addition to excavation, field work centered on research in preparation for the publication of the region of the Stoa, Theater, and Nike Monuments in Samothrace 8,I.
For the Stoa, we are completing and verifying the catalogue of blocks of all the courses of the building (about 1700). We examined roughly 1000 terracotta fragments from the roof system of the Stoa. In addition, we worked on the plaster associated with the building, concentrating especially on the reconstruction of the interior faux-drafted masonry design. Final drawings and 3D model are now being made. As part of our investigation of the Monuments on the Stoa Terrace, we are conducting an analysis to determine the source of the marble for several molded blocks, which appear, on visual inspection, to differ from the previously documented types of marble in the Sanctuary. Excavation in 2018 confirmed the design of the Theater recorded by the French-Czech team in 1923, and secured the relationship of the theater to the Nike Precinct, central torrent, and Altar Court. In 2019, we completed the actual state drawings, reconstruction drawings, and 3D digital model of the building. In addition, we began an initiative centered on investigating the Late and Post-Antique architectural monuments in the Sanctuary, centered in the Stoa terrace and Western Hill Region.
In preparation for the publication, team members selected, studied, catalogued, and photographed material from the Stoa excavations, including metal objects, bronze sculpture and terracotta figurines, and glass. The assemblage of pottery from the Nike Precinct was reviewed, quantified, and drawn.

In accordance with permits received to analyze local stones and imported marble stone types, we collected samples, building on our petrographical analysis of lithic materials used in construction the Sanctuary. The geomorphological team examined the landscape and block fields to determine the efficacy of GPR, which is planned for 2020.

At the close of excavation, trenches SGG.K.1, SGG.K.2, and SGG.CRav.3 were backfilled over a demarcating layer of geotextile. Trench SGG.CRav.1 was partially backfilled along its western side to maintain the tourist path. The eastern section of the trench was left open for further study in conjunction with plans to strengthen the modern channel of the torrent. Low berms were built to direct rainwater runoff into the central ravine and soil was added along the tourist path to create a smoother walking surface for visitors. In trench SGG.K.3, which will be reopened in 2020, the walls were buttressed with sandbags filled with earth and stones, then covered with a light layer of soil. Additional soil was added to the surface of the theater, which was backfilled in 2018, to protect against erosion by promoting plant growth.
The modern deposit of tiles uncovered in trench SGG.CRav.1 were collected in the open region of the Lower Stoa. The diagnostic tiles were partially moved to the area near trench SGG.K.2, which is not frequented by tourists; this move will be completed at the start of the 2020 season.
We stabilized the retaining wall east of trench SGG.K.3 by dry-packing the Hellenistic portion of the wall with stones, and re-mortaring the upper Roman part of the wall. Stabilizing the walls in the Lower Stoa area will be a conservation priority in 2020.

[1] Funding was provided by the National Endowment for the Humanities, Partner University Fund, Emory University, Institute of Fine Arts of New York University, College of William & Mary, and private donors.