About the Island, the Cult, and the Sanctuary 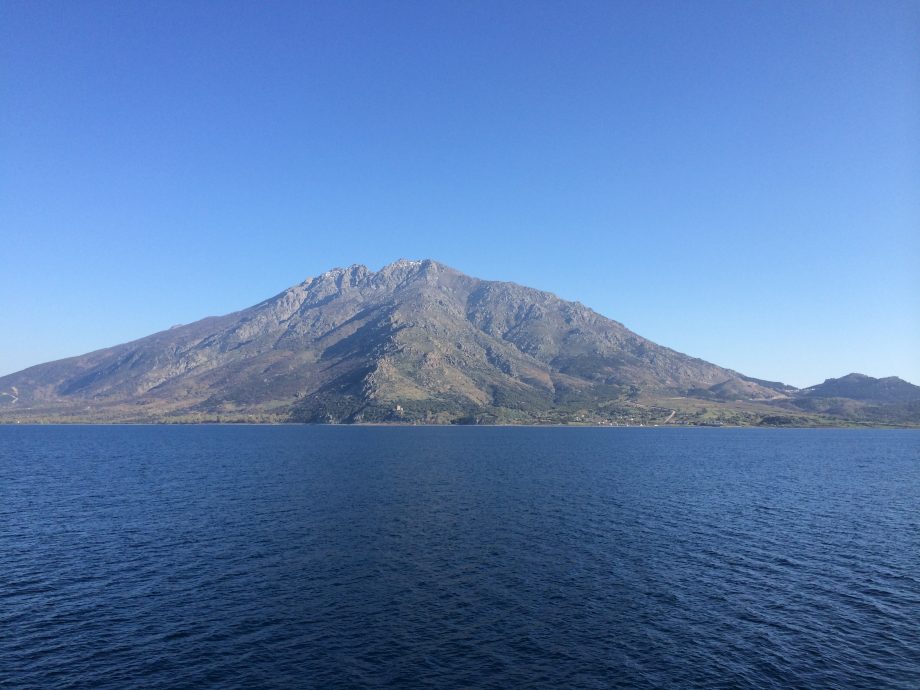 The small island of Samothrace, windswept beacon of the northern Aegean, rises from the sea to the lofty, mile-high summit of Mt. Fengari. A visual fulcrum between the plains of Troy to the east and the heights of holy Mount Athos to the west, Samothrace was the touchstone of sailors and the haunt of gods in antiquity. Even today, it has the unmistakable aura of sacred ground.  From its craggy heights, Poseidon, the earth-shaker, watched the Trojan War. Here, the Argonauts sought initiation en route to Colchis and the Golden Fleece; they returned again on their way west. Odysseus stopped on his long journey home; and according to one version of events, Aeneas (descendent of the Samothracian, Dardanos) paused to collect the Penates on his way westward from Troy.

Here, events occurred that shaped the mythic and historic ancient world.  The island’s legendary family was born of the Titan Elektra and the god Zeus. Of their three children, Dardanos gave birth to the Trojan people, Harmonia gave form to the personification of harmony, and Aetion taught humans the sacred rites of the mysteria.  Here, the parents of Alexander the Great first met, and two centuries later, the last Macedonian king, Perseus, held his final stand against the Romans. 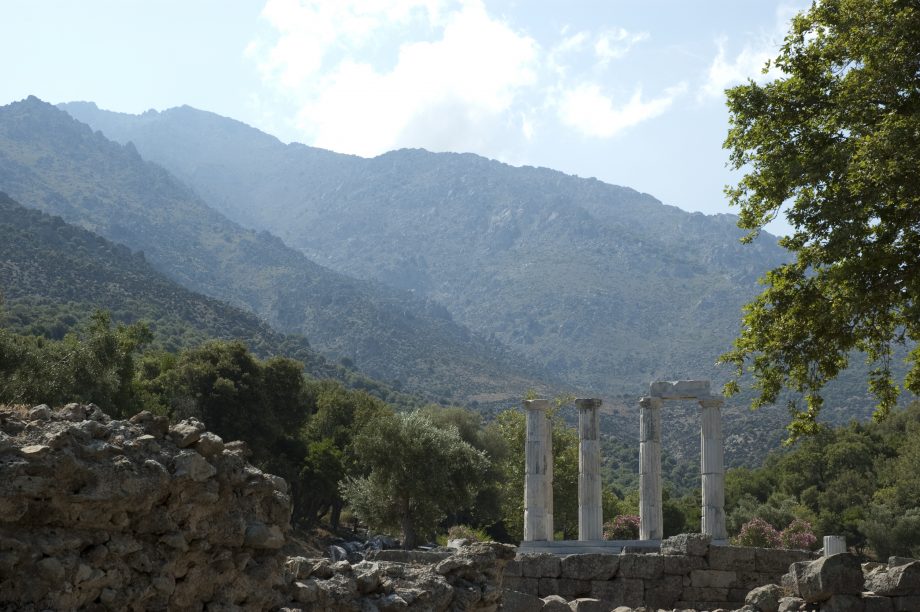 In antiquity, the fame of Samothrace emanated from its cult of the Megaloi Theoi, Great Gods, whose rites of initiation, known as the mysteria, promised protection at sea and the opportunity to “become a better and more pious person in all ways.” (Diodorus)  Their sanctuary, which was set in a cleft in the earth at the base of the mountain, framed by converging torrents, and facing toward the sea, feels spiritually integral to the deities of the earth, sky, and sea who played a fundamental role in the mysteria. The nature of the rites of initation was held in silent trust by the community of initiated. However, the transformative power of the rites is well attested by ancient authors, by the lists of initiates who came to the sanctuary, by the innovative architecture that sheltered the rituals, by the splendid dedications offered to the Gods, and by the humble but crucial detritus of cult—pottery and animal bones—that built up over centuries of use spanning from the 7th century BCE to the 4th century CE. Collectively, these physical and literary testimonia provide a key point of access to the spiritual, political, and cultural psyche of the ancient world. 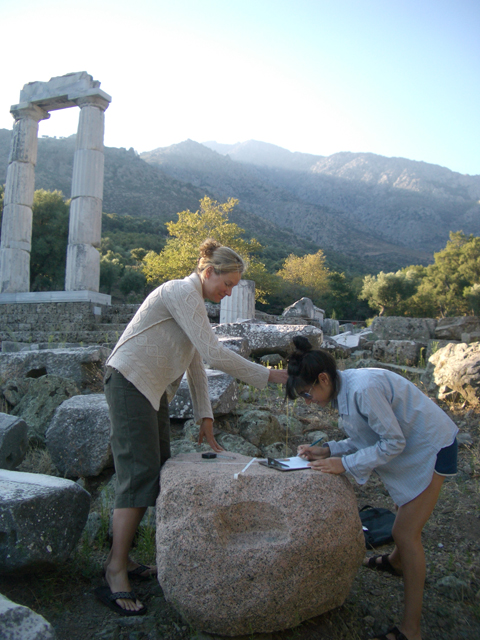 We are the latest in a long succession of explorers going back to the famous antiquarian, Cyriacus of Ancona, who visited Samothrace in 1444 and recorded remains in the sanctuary.  French, German, Greek, Austrian, and Czech investigators have all helped to build the story of Samothrace.  The American team, sponsored by the Institute of Fine Arts of New York University, began its work at the Sanctuary in 1938. Except for a hiatus during World War II, the American team has continued work at the Sanctuary ever since. James R. McCredie directed research and excavations for 50 years, from 1962-2012. In 2012, Emory University joined the Institute of Fine Arts as the American sponsors of the research team. The team is now under the direction of Bonna D. Wescoat of Emory University. We work under the auspices of the American School of Classical Studies at Athens and the supervision of the Ephoreia of Antiquities of Evros.

Our team includes archaeologists, conservators, geologists, geomorphologists, geographers, numismatists, and architects, as well as students in all of these fields. Currently, our main objective is to complete publication of the western region of the Sanctuary. For a description of each season’s investigations, go to the Research tab. We are particularly interested in using digital reconstructions and animations to understand the passage of the pilgrim within the Sanctuary, which in turn informs our understanding of the nature of the experience of initiation, the rites of which were kept secret. For more on this project, go to the Visualizing the Sanctuary tab. 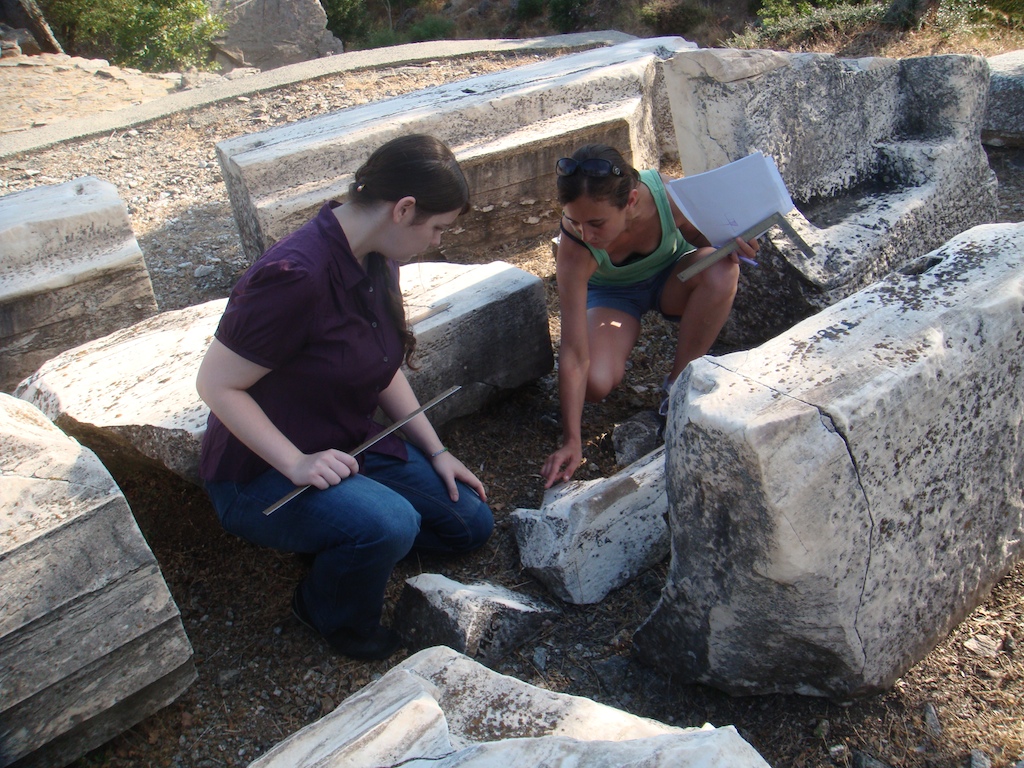 The aim of this website is to present the current research of the American team working in the Sanctuary of the Great Gods on Samothrace.

The website was originally built in Drupal and hosted on the Michael C. Carlos Museum server, with a separate WordPress blog site for iSamothrace. In 2015-2016, the websites were combined and rebuilt in WordPress by Anandi  Salinas, Instructional Content Developer, at the Emory Center for Digital Scholarship (ECDS). The site is now hosted by ECDS.