Understanding Human Movement in the Sanctuary Through Agent-Based Modeling

In the Sanctuary of Demeter and Kore at Eleusis, the Mysteria was held only once a year, but in the Sanctuary of the Great Gods on Samothrace, initiations were held throughout the sailing season, when travelers could reach the island. From the initiate lists which have been discovered, we deduce that the numbers of prospective initiates could differ dramatically each time the rites were conducted. The rewards of initiation were individual, but the experience was communal.

The number of initiands would impact the experience of initiation in several ways, from the interaction of the group to the dynamics of moving from one station to the next within the complex topography of the Sanctuary. Open spaces, narrow thresholds, and steep paths shape the passage of the pilgrim, particularly when entering the Sanctuary. First, we find a slightly sunken paved courtyard in front of the Propylon of Ptolemy II, an obvious area for people to collect. The propylon (entrance gate) is scaled to the size of a hexastyle temple with five openings to pass into the east-facing roofed chamber.  The door wall, however, has a narrow opening that hardly allows two persons to pass through together. In the western chamber, the space again opens up to the full colonnade, with a stepped ramp leading to the Theatral Circle that is some 11m wide.

Eric Bonabeau writes that in ABM, “a system is modeled as a collection of autonomous decision-making entities called agents. Each agent individually assesses its situation and makes decisions on the basis of a set of rules.” Using each agent’s ability to sense and actuate, we turned the sanctuary entrance into a maze-like environment with initiate-agents. On the assumption that initiands would need to be guided through the rituals of initiation, we created a leader-agent, who navigated the sanctuary according to a simple way-points system leading from the front of the Propylon to the Theatral Circle. The goal of the initiate-agents was to try to follow the leader-agent. They were programmed to remain within the walkable areas and to avoid colliding with architectural elements or other agents. 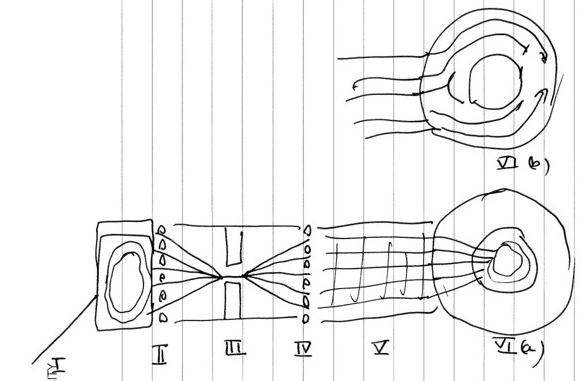 Early sketch depicting a part of the ABM simulation strategy.

We ran the program multiple times with different numbers of initiate-agents. The videos below show a top-down perspective of the entrance passage from the Propylon of Ptolemy II to the Theatral Circle, with the leader-agent highlighted in pink and the initiate-agents highlighted in cyan. The first video depicts 10 initiate-agents and the second contains a denser group of 40 initiate-agents. Each time we ran the program, the agents acted in a different fashion, as we might expect first-time initiands also to configure in unique ways. Group with less than 10 agents rarely broke out of a single line once channeled through the doorway, while larger groups clustered more densely to stay in closer proximity to the leader agent. By running the program multiple times, we aim to gain a better sense of the pace and experience of entering the Sanctuary for different scales of groups.

The work on this interactive build is in progress. We plan to share more updates as the project develops and expands into other parts of the Sanctuary. You can also explore out how our modeling team used ABM to create an interactive build of the slave vessel L’Aurore, an ongoing project for SlaveVoyages.org.