April 15-16, 2021: From the Vantage of Victory: The Sanctuary of the Great Gods and the Island of Samothrace Symposium 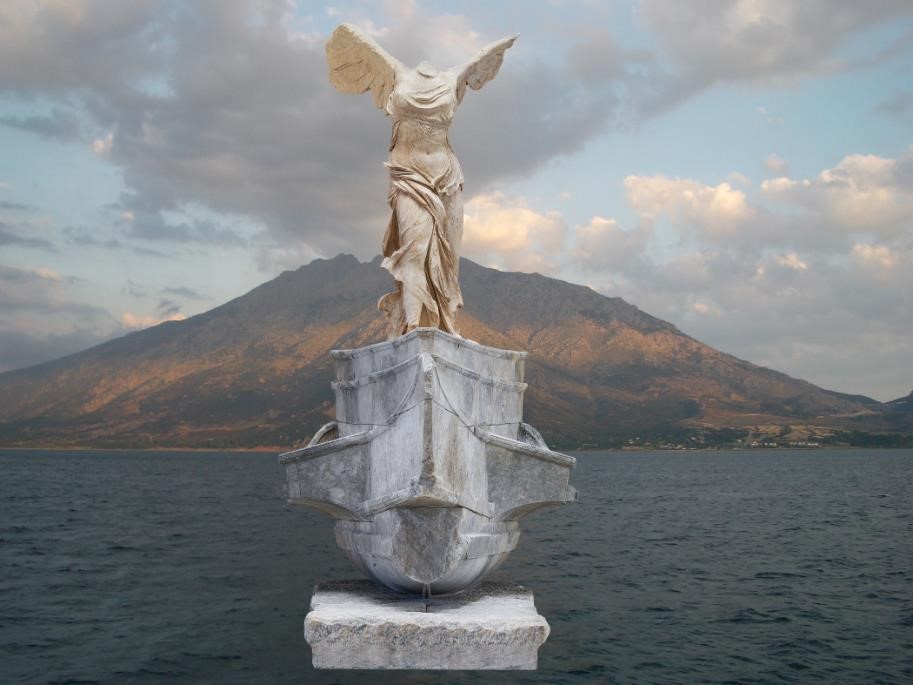 Click here to view the program for the 2021 Symposium.

The virtual symposium, “From the Vantage of the Victory: The Sanctuary of the Great Gods and the Island of Samothrace,” held on April 15–16, 2021, marked the culmination of the NEH-supported research project centered on the Nike of Samothrace and the area of the sanctuary which was once her home. The symposium featured 18 scholars from eight different academic and cultural institutions presenting the results of nearly five years of research. They were joined by nearly 200 members of the public hailing from 13 different countries. 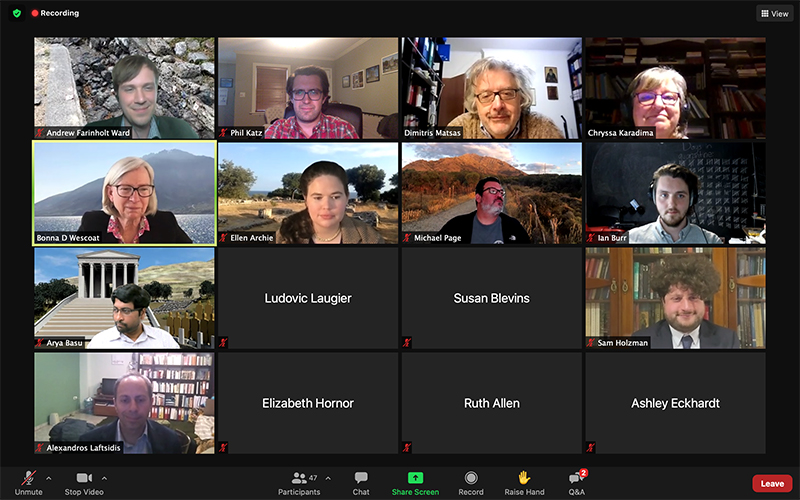 Since 2016, American Excavations Samothrace’s research and excavation program has been generously supported by a Collaborative Research Grant from the National Endowment for the Humanities. We have focused on the spatial, material, historical, and sacred environments of the Nike, with the aim of re-envisioning the statue within its original contexts. In conjunction with this work, we have made substantial progress towards investigating and publishing nearly a dozen buildings and monuments in its vicinity; digitized and transcribed the excavation’s 80 years of paper records; and pioneered new techniques for digital modeling and visualization.

The first day of the symposium was headlined by Ludovic Laugier, curator of Greek sculpture at the Louvre. As the Michael C. Carlos Museum’s Laszlo Excalibur lecturer, Laugier presented the results of the Louvre’s 2014 restoration and redisplay of the Nike, as well as ongoing research on the ram of the prow on which she stood. The pair of sessions in the afternoon further explored the Nike by examining her original context in the sanctuary, presenting the substantial progress that has been made toward producing a publication of record for both the statue’s architectural setting and the immediately adjacent Stoa, the largest recorded ancient monument on the island.

The first session, featuring papers by Bonna Wescoat, Madeleine Glennon, Alexandros Laftsidis, and Andrew Farinholt Ward, focused directly on the Nike Monument itself, presenting revised interpretations of the building’s architectural reconstruction and use of molded plaster, a reanalysis of its ceramics assemblage, and the results of recent excavations in the Theater which the monument capped. The second panel pivoted north to the Stoa, with papers by William Size, Samuel Holzman, Claire Seidler, and Susan Ludi Blevins variously exploring the building’s materiality and unique use of locally quarried stone, details of its design and construction, and how it functioned as a place of monumental display. 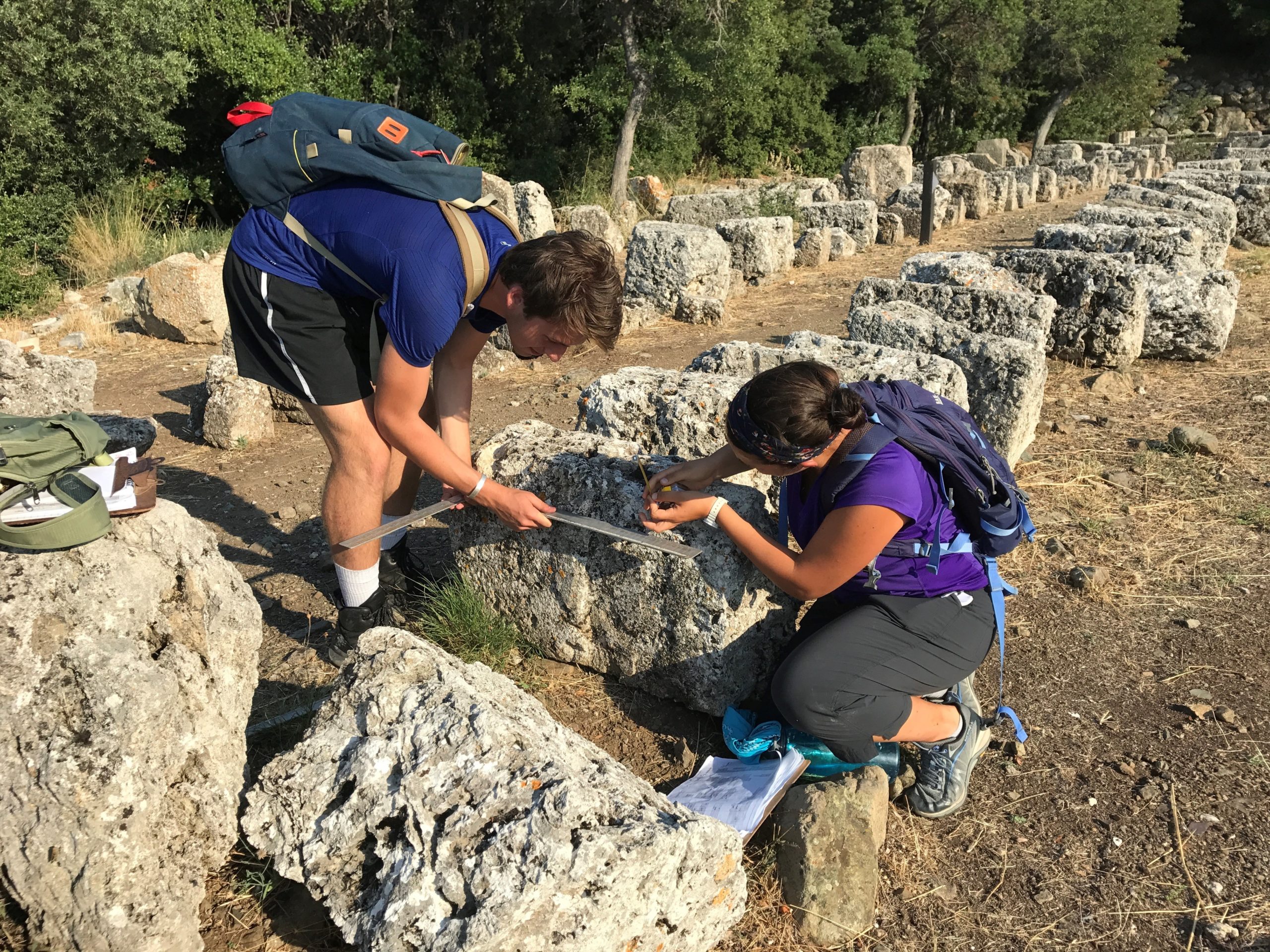 Students analyzing and recording blocks of the Stoa in a blockfield on the Stoa Terrace, © American Excavations Samothrace

Day two of the symposium widened our lens even further, beginning with a series of provocative keynote lectures. The first, delivered by Dimitris Matsas, retired ephor of the 19th Ephorate of Prehistoric and Classical Antiquities, Komotini, brought the Samothracian Great Gods into dialogue with the religious landscape of the entire island, from prehistory through the Byzantine period. Chryssa Karadima, Director of the Ephorate of Antiquities of Rhodopi, followed with an illuminating summary of recent excavations in the ancient city east of the sanctuary, an area which remains largely unexplored but holds enormous promise for future work.

The remainder of the day returned to the sanctuary itself with a series of panels that presented recent research across the entire western area of the site. The first, featuring papers by Maggie Popkin, Jessica Paga, and Andrew Farinholt Ward, explored interrelated issues of access and movement, focusing especially on how initiates may have moved across the Central Ravine, through the Altar Court, and up the Western Hill. This session was followed by a set of papers by Amy Sowder Koch, Madeleine Glennon, and Ellen Archie that presented new analyses of the metal, terracotta, and glass finds from the excavations of the Stoa. The day concluded with presentations by Michael Page, Ian Burr, and Arya Basu on the development of new digital visualization techniques, from three-dimensional modeling and animation to agent-based modeling, that allow us to investigate movement and perception while sharing our research with a broad audience. 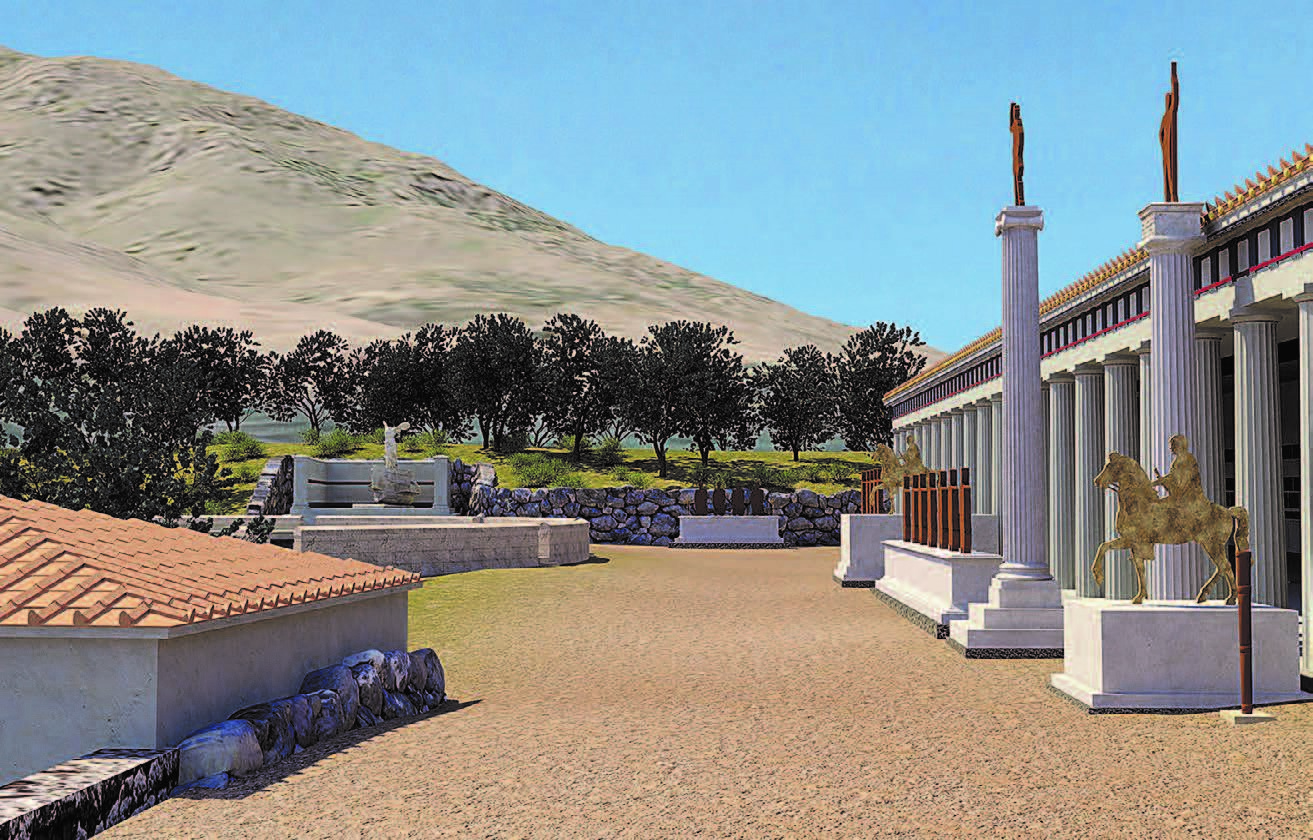 3D model reconstruction of the Stoa Terrace from the north, with views of the Stoa and Nike Monument, © American Excavations Samothrace

The work carried out over the past five years has reshaped our understanding of the Sanctuary of the Great Gods, providing new insights into how buildings like the Nike Monument, Stoa, and Theater were designed and built; how ancient visitors may have interacted with the sanctuary’s built and natural environments; and how modern scholars can best visualize and present the sanctuary to diverse audiences. The American Excavations Samothrace team extends our sincere thanks to the National Endowment for the Humanities for their generous financial support. We are also grateful for the support of the Michael C. Carlos Museum at Emory University, and for all the participants and attendees who helped to make the symposium such a success.

If you missed any part of the webinar, the full recordings are available thanks to the Michael C. Carlos Museum: