by samothraceadmin
6 years ago
154911 Views
0 Comments 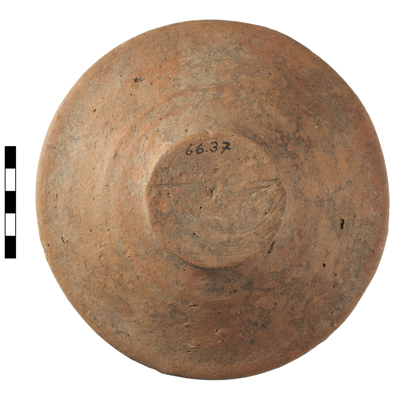 Used for several centuries in the Sanctuary, the ubiquitous Samothracian conical bowl maintained a remarkably consistent overall shape: a shallow, upside-down cone extending outward from a flat ring or string-cut base. Thousands of conical bowl fragments have been found throughout the Sanctuary, the earliest dating to approximately the middle of the 3rd century B.C. Scholars have concluded, based on the comparison of conical bowl finds in numerous Samothracian contexts, that the conical bowl with ring base (65.0745a,b) preceded the conical bowl with string cut base  (66.0037, 66.0879).  The slightly revised form, in which the potter removed the vessel from the wheel by cutting the base with a string, appears in stratigraphic contexts in the early 1st century B.C. This chronological distinction is significant for dating some features on the Eastern Hill and also in the rest of the Sanctuary.

Several large deposits of conical bowl fragments have been found on the Eastern Hill.  Archaeologists found huge quantities of conical bowls, including whole bowls as well as bowls that appear broken in half, in the area behind the Stepped Retaining Wall and in the collapsed terrace fill immediately south of the Dedication of Philip III and Alexander IV.

The enormous quantity (tens of thousands of fragments) as well as the consistency of the fill (very little earth and other debris) suggest that the bowls were deposited there intentionally. It is tempting to imagine that this cache was a deposit of conical bowls used by initiates who then discarded the bowls behind the Stepped Retaining Wall, either when they proceeded from the Theatral Circle toward the heart of the Sanctuary, or when they exited the Sanctuary.

The exact function of the conical bowl is unclear, as it is an imperfect vessel either for drinking or for eating.  Likely, visitors to the Sanctuary and initiates most likely used conical bowls in ritual libations and for dining after initiation or in connection with the annual festival.
66.0037, string-cut foot
66.0037, profile
66.0879, profile 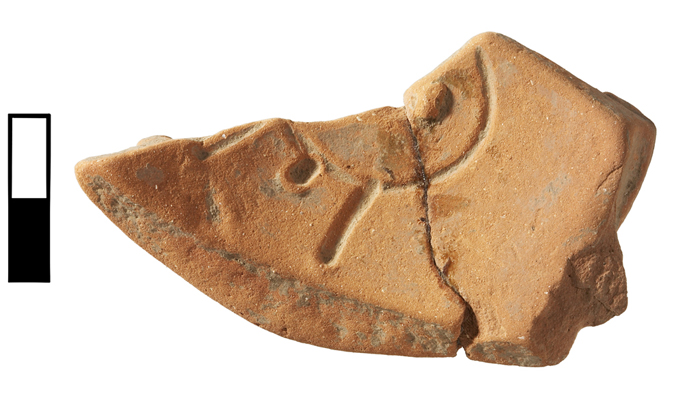 Identification of vessels, lamps, tiles, and other objects as property of the gods by stamping or incising them with the Greek letters Θ (theta) or ΘE (theta epsilon) appears to begin as early as the 5th century B.C. in the Sanctuary of the Great Gods.  The ten bowls and plates from the Eastern Hill stamped or incised with a Θ or ΘE may be added to the approximately 260 examples found in other contexts throughout the Sanctuary. It is likely that participants in the Mysteries used the inscribed vessels in connection with ritual activities that took place within the Sanctuary. Karl Lehmann hypothesizes that initiates used theta vessels in the rites of myesis,a lesser stage in initiation into the Mysteries, and vessels inscribed with an epsilon in the rites of epopteia, a higher stage of initiation. 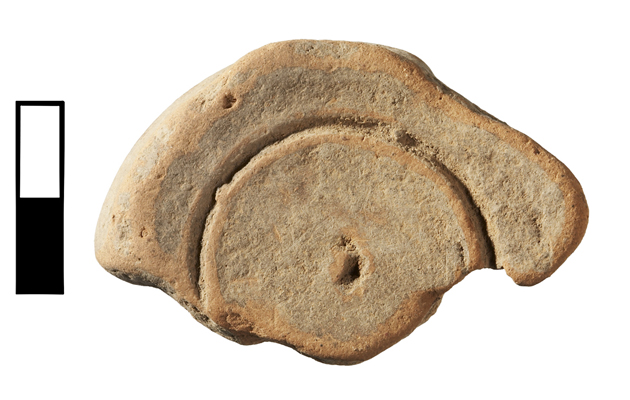 It is tempting to interpret the Θ or ΘE as an abbreviation for the Greek dative Θɛοῖς, (theois), which would declare the vessels to be gifts to the gods. However, a bowl discovered in the fill from the Stoa and stamped in the interior center with the full word ΘΕΩΝ (theon) supports the position first presented by Karl Lehmann that an inscribed theta identifies an object as sacred property of the gods.  The inscribed letter forms vary; the most common form of the theta is a circle with a short dash in the center (65.0340). One surviving inscription (66.0352) has a theta with a ligature (adjoining) epsilon.  This fuller form of the word theon appears to be an earlier type that disappeared as early as the 3rd century B.C., giving way to the simpler form.

Discovered just outside of the Theatral Circle beside the Rectangular Monument, this three-quarter complete Attic one-handler has been restored from twenty-eight joining fragments. The vessel is covered in a mottled red and black glaze; the resting surface of the foot and the underside remain unpainted. This shape was one of the most popular black-glazed bowls produced by potters in and around Athens in the 5th and 4th centuries B.C., by the end of which potters preferred vessels without handles. Scholars have suggested that the Greek term for this vessel type would have been κάναστρον (kanastron). Low bowls such as this one-handler were useful for drinking or for eating solids such as porridge or gruel. Like other one-handlers, this bowl rests on a low, ring foot and has one horizontal handle attached just below the rim. This vessel type is distinguished by the thick side walls and the shape of the rim, broad on top and often sloping inward in order to contain liquids. This one-handler is just one of many examples of Attic pottery imported to Samothrace in antiquity. 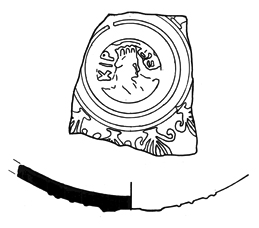 This fragment comes from a hemispherical, moldmade bowl bearing relief decoration, commonly known as a Megarian bowl. To make this type of bowl, potters first fabricated a wheelmade mold. While the clay of the mold was still damp, the decoration was stamped or incised into the interior of the mold.  The potter then pressed soft clay into the mold resulting in an elaborate design on the exterior. Usually, a decorative medallion in the center bottom of the bowl anchored the designs filling the walls of the vessel. 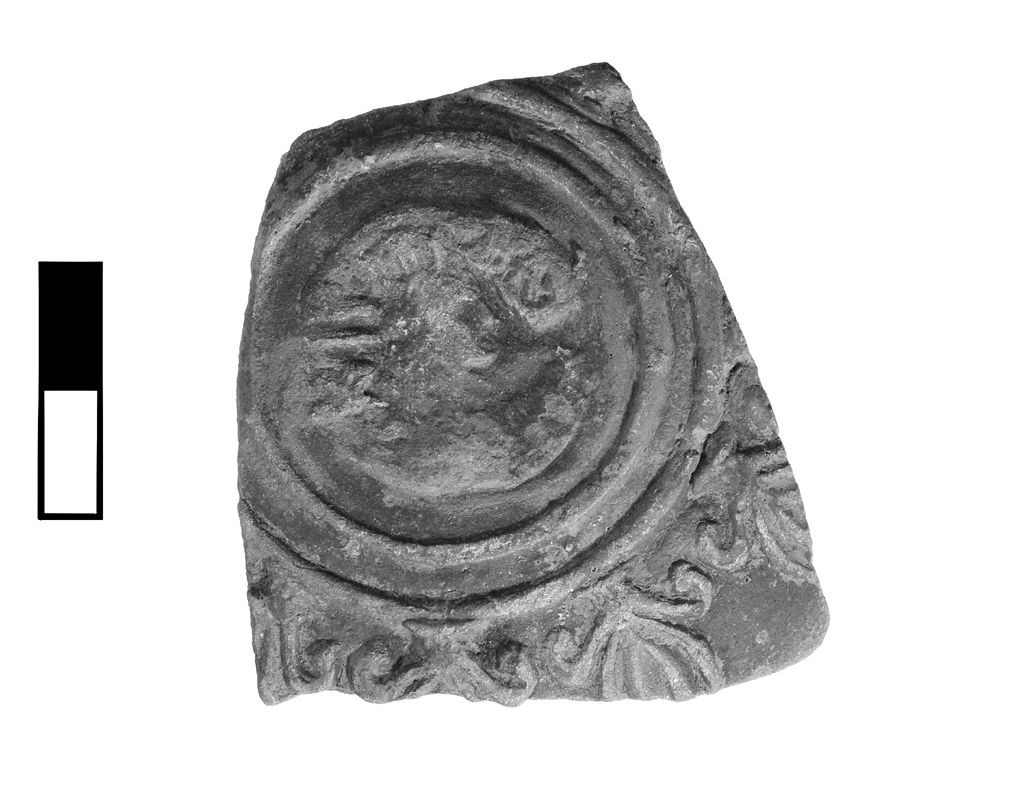 One such medallion, consisting of a round stamp bearing the head of a goddess facing to the right, is preserved in this fragment. A circle of lotus palmettes growing from outcurved tendrils extends from the two raised ridges that encircle the profile of the goddess. The goddess wears a mural crown with three tall towers designating her as the patron of a particular city. A signature consisting of the three letters ΚΙΡ to the left of the head and the three letters ΒΕΙ to the right indicate that this vessel came from the workshop of Kirbeis. Susan Rotroff has compiled a catalogue of at least forty vessels from the workshop of KIRBEIS. Most of them come from the northern and western shores of the Black Sea and the Aegean, leading scholars to believe that the workshop was located either around the Black Sea or in Asia Minor. Based on the characteristics of the grey-brown, fine clay of this vessel Susan Rotroff has suggested that the Samothracian fragment is from the area of the Black Sea. 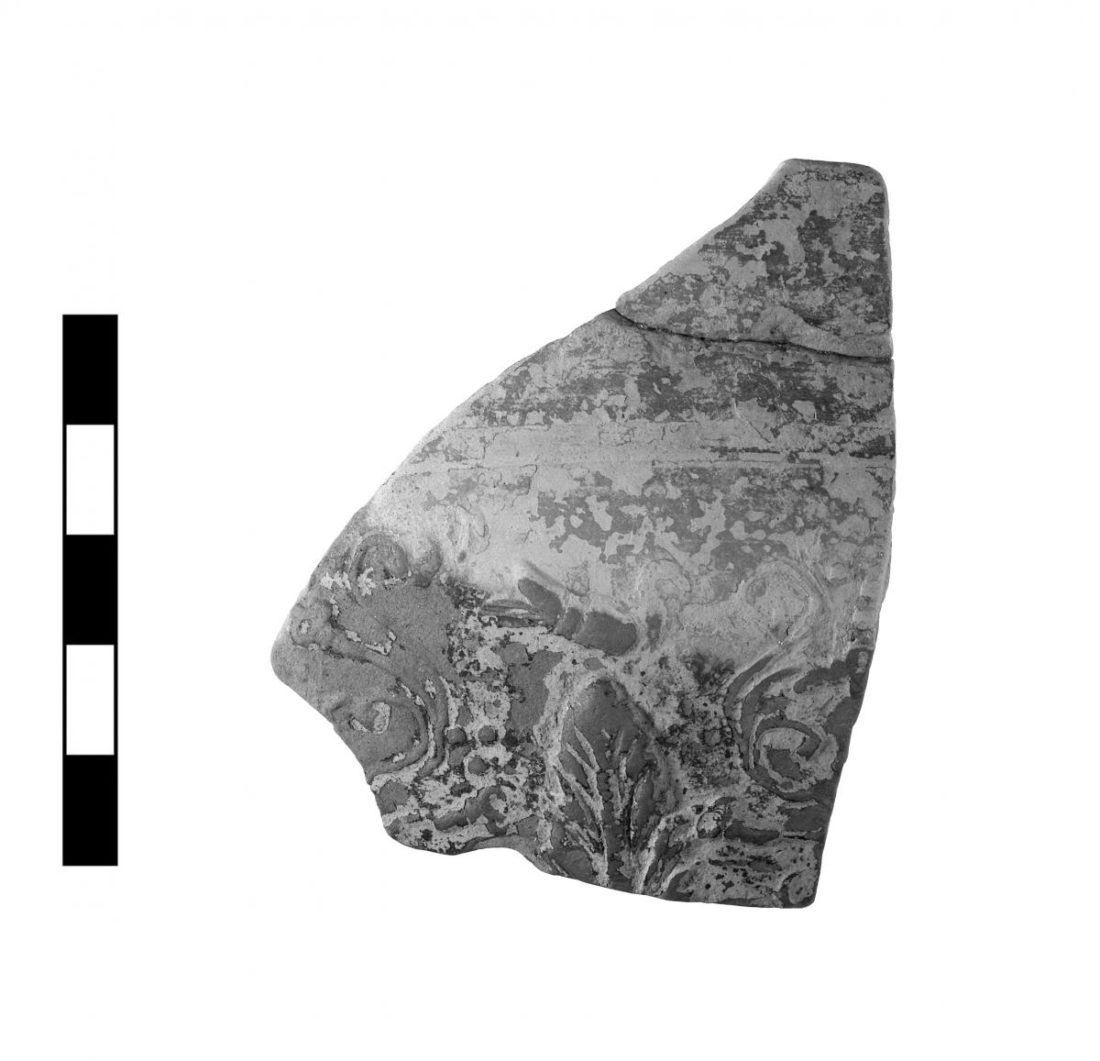 Although finds of moldmade bowls are relatively rare in the Sanctuary, excavators have unearthed two from the Eastern Hill. Moldmade bowls were first manufactured in the last quarter of the 3rd century B.C. and may have been based on metal prototypes. This fragment from the rim and wall of a hemispherical shaped bowl is an example of a bowl with floral embellishment. Represented is an acanthus leaf flanked by a stylized plant sprouting spiraling tendrils. Three dots beside the tendrils and a bird sitting to the right above the acanthus enhances the decorative effect. 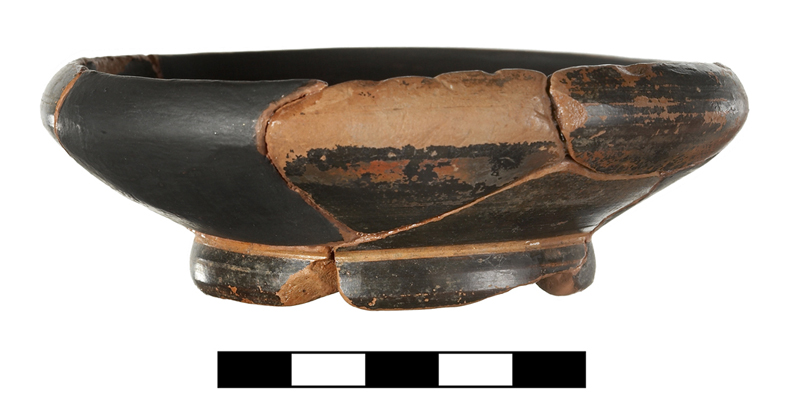 This small stamped bowl imported to the Sanctuary from a workshop in or around Athens was a creation of the 4th century B.C. and is comparable to examples from the Athenian Agora. With an incurving rim, this bowl rests on a large ring foot, and has a shallow groove in the bottom of the foot and in between the foot and wall. Black-glazed bowls of this type were typically adorned with stamped or impressed decoration on the interior. The five alternately linked palmettes within three concentric rings of rouletting are standard. Light concentric grooves that guided the placement of the decoration are still faintly visible on the surface. Potters created rouletting, which did not appear until the second decade of the 4th century, by holding a slender metal strip to the damp clay of the bowl as it rotated on the wheel. Similarly, craftsman stamped the palmettes into the wet clay before application of the black glaze. This bowl, dated to the middle of the 4th century B.C., is consistent with the fill in the east foundation of the Dedication of Philip III and Alexander IV, which was built between 323-317 B.C. 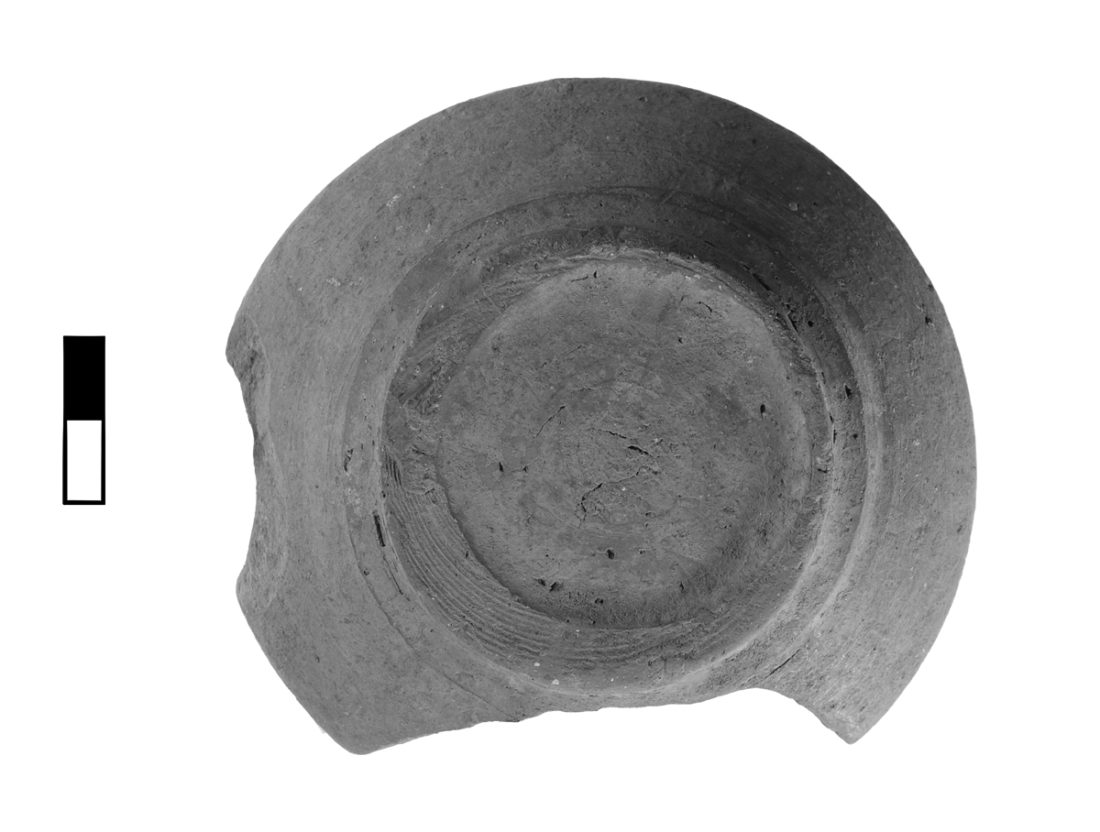 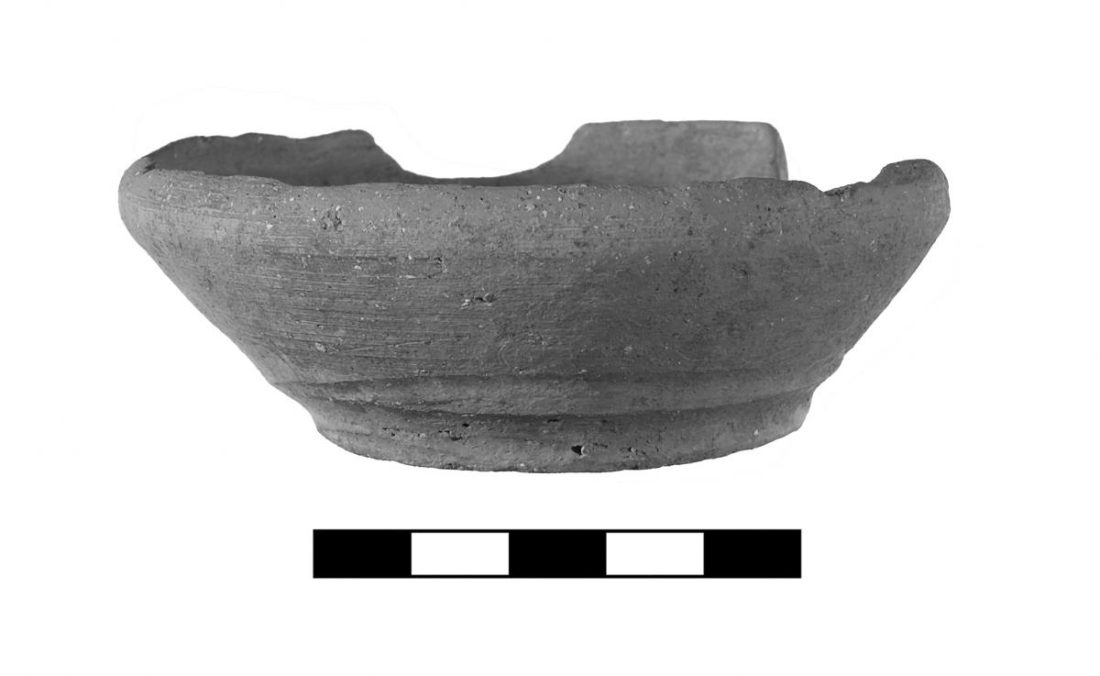 Ideal for salt and other condiments at the table, the saltcellar was a popular vessel type during the Hellenistic period. This locally-produced courseware example is similar in fabric to the Samothracian conical bowls.  These humble objects have resonance in the larger world view of Samothrace in the Hellenistic period.   Callimachus, a Hellenistic Greek poet, tells the story of a saltcellar in Epigram 47, “The saltcellar, whereon, by eating frugal salt for relish, he escaped the mighty storms of debt, Eudemus dedicated to the gods of Samothrace saying, “According to my vow, O people, saved through salt I dedicate this here.”

Other famous dedicatees include the Argonauts, who left offerings of bowls in the Sanctuary after safe passage, and Aeneas, who, legend has it, dedicated shields at the entrance to the Sanctuary. While visitors to the Sanctuary marveled at the number of votive dedications made by persons who escaped the violence of storms at sea, Callimachus reminds us that even modest objects could be worthy of dedication to the Great Gods.