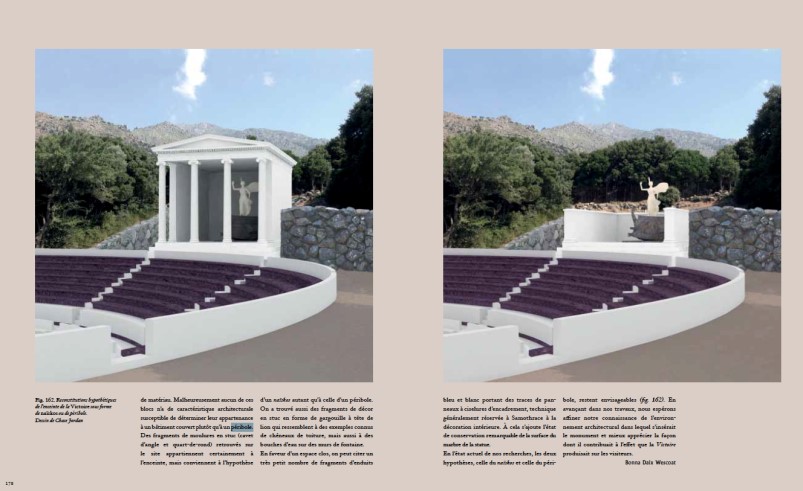 The 2015 summer season had many architectural projects to tackle! Within our office cottage lies the “architecture grotto,” where our motto is “home is where the surfboard is,” surfboard being the nickname of the tank of a laptop used for architecture software.

In order to get started, the Master Sanctuary AutoCAD file containing the cumulative survey points and linework of our previous seasons needed to be organized. There were mislabeled polylines, multiple layer colors for similar stones, duplicate points, and unused layers. After going through each layer of the file, creating a color coding system that builds off of the previous one, and restructuring how to show dates for point data, the file is now a perfect angel baby! Each new set of survey points is placed on its own layer titled “PNTS – (1 or 2 word description + the date it was placed in the file).” The linework from the survey data, however, is identified and color coded according to its function. For example, all euthynteria blocks are blue, and all foundation courses are green, etc. 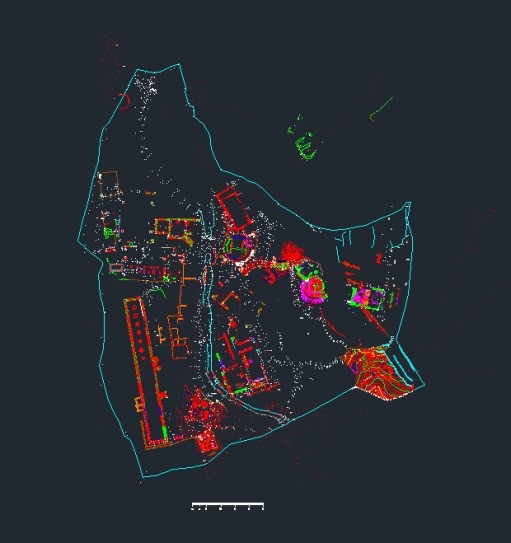 AutoCAD line drawing of the sanctuary

With the AutoCAD file in good shape, we began work on the Altar Court. One of the major goals of the season is to better understand the original elevation of the Altar Court. It is a surprisingly puzzling question, due to the comparatively low floor level of the Hall of Votive Gifts immediately to the north and additionally the relationship to the relatively high level of the theater orchestra to the west. Somehow, the Altar court must have met the same level of the theater orchestra, and simultaneously provide circulation down to the Hall of Votive Gifts. Additionally, new theories are being tested regarding the number of bays above the diazoma in the theater. 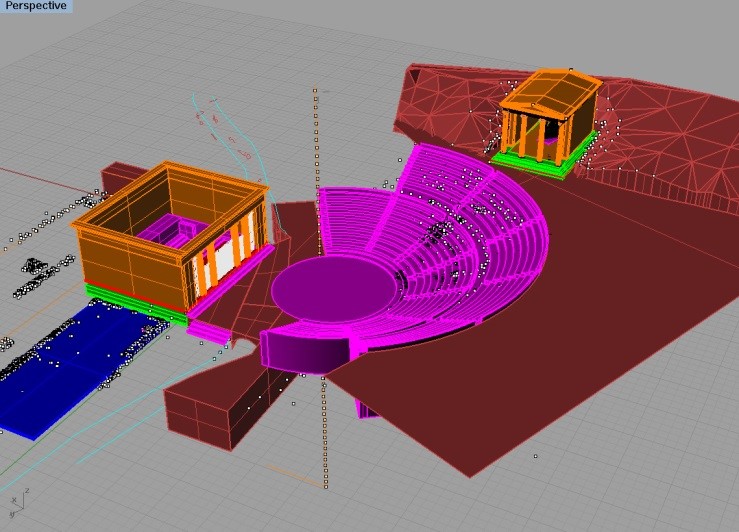 AutoCAD drawing of the Altar Court, Theater, and Nike Precinct

Another test project in the architecture grotto was testing 3D modeling of trenches from excavations of the Nike precinct. Using excavation diaries and a provided grid coordinate system, we mapped our first trench on the eastern side of the precinct, using the elevation data to plot the finds. One experimental method of representing this data is to use an exploded axonometric drawing, which shows both plan and section data of the trench and stratifies the layers where different materials where found in the trench. This technique would show the shape and location of the trench, elevations of layers in which materials were found, what type of materials, how many, and their respective catalog numbers. The data collected from this exercise will be used to find if there is any correlation between the layers of excavated materials and what materials were used to show interiority, exteriority, and whether or not the Nike precinct was a covered monument. 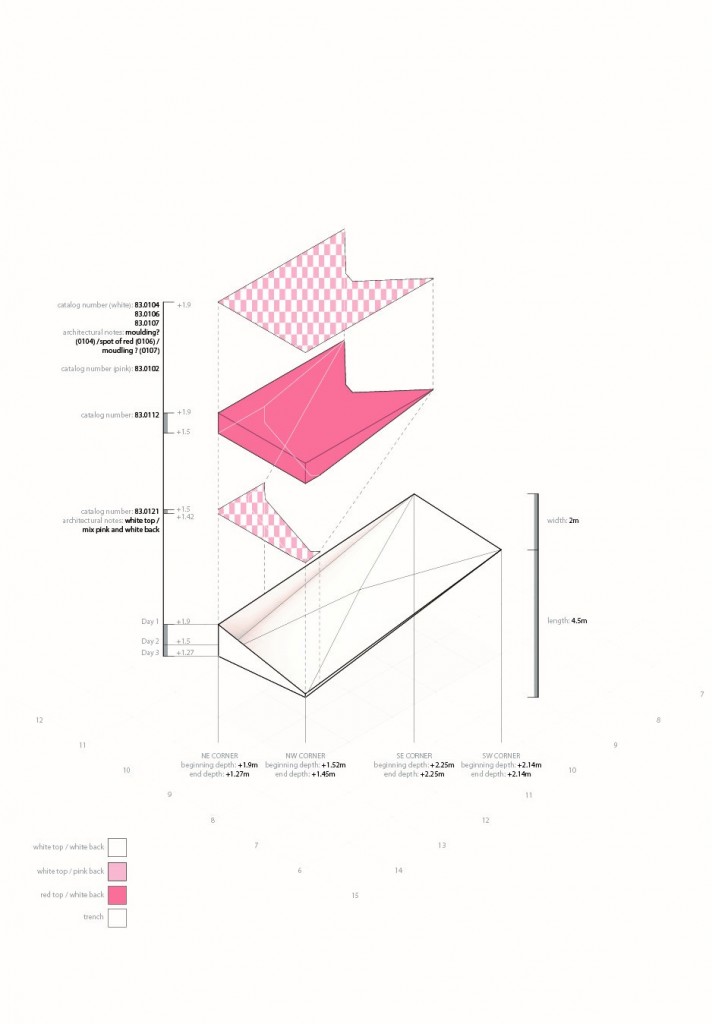 Axonometric drawing of a trench in the Nike precinct

Another ongoing project throughout the summer was converting the hand colored stone maps into a digital format. Different types of stone from each of the major monuments have been previously identified and mapped on paper, and now we’re transferring the data into illustrator and ArchGIS. The illustrator maps will be designed for publication and the ArchGIS data can be used to geotag the stones to better understand the elevation and topography of the site.

The rediscovery of the M190 column in the central ravine outside of the sanctuary was an exciting find! It belonged to the Milesian Dedication building, whose other column drums have been measured and drawn for publication of the Western Hill. With a team of very precise archeologists as measuring assistants, we drew the column in 1:10 scale with noteworthy characteristics to represent its current state. The drawing will eventually be inked to be included with the other inked column drum drawings of the Milesian Dedication.

Drawing of the M190 column

And last, but certainly not least, the Nike monument! Last summer, we worked very carefully to understand the relationship of the Nike Monument to the Theater. After several weeks of measuring the archeological finds and comparing that to the survey data in the field, we were able to put together a rendering of the reconstructed monument, which has since been published by the Louvre and several other publications. The goal this year was to update the rendering with colored plaster wall panels that have been excavated in the precinct, update the 3D model of the Nike sculpture herself, and adjust the architectural features to line up more closely with the archeological evidence.

Rendering of the reconstruction of the Nike Monument