The base of the Western Hill below the Stoa was lined with dining chambers. One set of rooms (L, M, and N) formed a large dining complex divided into three chambers, each measuring approximately 6.50 m on each side.  The square plan of the rooms, along with a raised marble border preserved on the floor of the two outer rooms, provides evidence that dining couches once lined the walls of these chambers. Within the marble border, the rooms were paved with marble chips in set cement, while the central room was entirely paved with black and white pebbles set in cement. Here pilgrims could recline and dine as part of the ceremonies accompanying initiation. 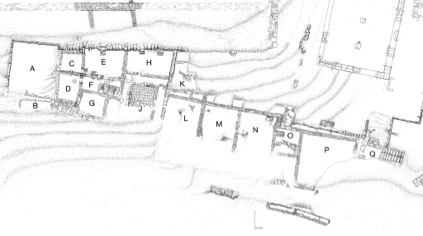 In the late Hellenistic period a small square room (O) was attached to the northern end of the central dining complex.  Its off-center threshold indicates its function.  The surviving floor was composed of roughly cut tessarae set in cement.

Yet another larger square room (P), measuring approximately 9.60 m on each side, was added to the north side of the small chamber during the Roman expansion of the Sanctuary, using mortar to bind fieldstone masonry.  It may replace an earlier chamber.  Based on its shape and location, it most likely served as an additional dining room.