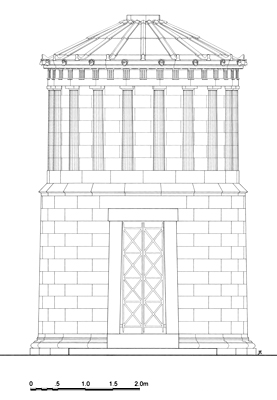 In the late fourth century B.C., a small Doric rotunda, measuring approximately 4.10 m in diameter, was built north of the Sacred Way on the slope to the west of the later Rotunda of Arsinoe II.  On top of a fieldstone foundation and floor, the marine limestone walls were constructed as two superimposed drums, creating a structure that was much taller than it was wide.  The lower drum was molded at its base with a large torus, topped with a cyma reversa and an astragal.  Rising from a simpler molding, the upper drum was decorated in the Doric order with eighteen engaged columns and a frieze of triglyphs and metopes.  The roof was made of the same limestone that comprised the walls.  Piercing the lower drum, a door faced the northwest to meet a rectangular ramp approximately 2.70 m wide, which extended from the building.  Inside the rotunda, three steps descended to a solid floor, paved with fieldstone.  A later remodeling covered the top two steps with wedge-shaped bricks or tiles to create a single shelf or bench. 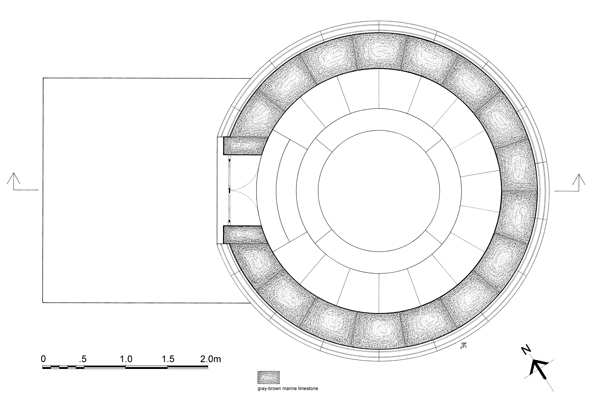 Although considerably smaller than the later Rotunda of Arsinoe, the Doric Rotunda resembles its shape and design with a solid lower drum and Doric upper drum.   Although the descending steps are suggestive, the paved floor rules out the possibility that this building served to honor chthonic deities or for a burial, where an earthen floor would be more appropriate.  Noting similarities with monumental tombs of Classical and Hellenistic Asia Minor, J.R. McCredie suggests that this building may have functioned a cenotaph.