The Hieron, one of the most impressive buildings in the Sanctuary, stands in the southern end of the central valley, adjacent to the Altar Court. Although the centerpiece of the Sanctuary today, in antiquity the Hieron was obscured almost entirely from view by the broad Hall of Choral Dancers. Rounding the corner from the central plateia, which surely afforded a carefully choreographed, dramatic approach for the ancient visitor who would have been delighted by the sudden appearance of such a grand structure. 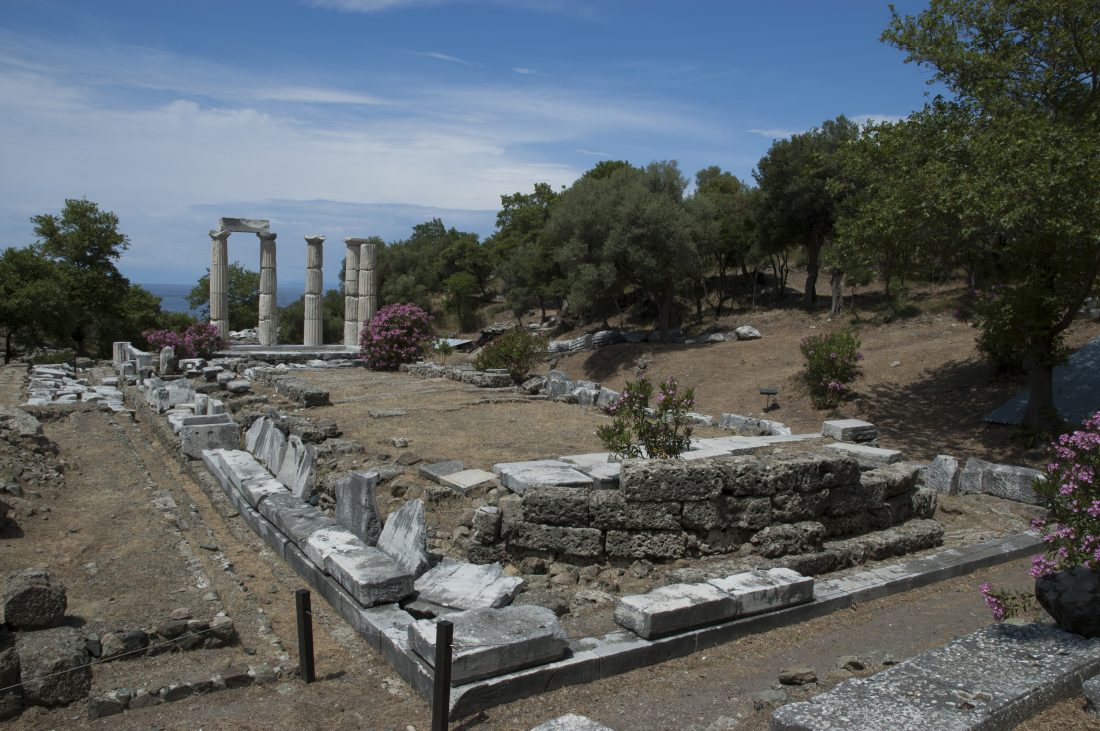 The Thasian marble building is oriented on a north-south axis and rests on limestone foundations measuring c. 13 m. wide by 40 m. long. The building features a Doric double colonnade of six columns before a long cella terminating in a hidden apse that is not betrayed by the rectilinear design on the exterior. Elaborate architectural embellishments and sculptural additions adorn both

the inside and the outside of the building. The roofline was enhanced on both the north and south sides with akroteria, in the form of floral motifs atthe apex and sculpted figures of Nike, the goddess of victory, in the corners. Both pediments contained figural sculpture; the front in the round and the rear in relief. A decorative gutter with palmette antefixes and lion-head waterspouts framed the structure. In addition to the main door, the Hieron had two lateral doors, each decorated with meander patterns. The walls of the interior were painted to imitate coursed masonry. The marble ceilings of the porch and pronaos featured a complex system of coffers, some of which were crowned with magnificent prancing centaurs that were impressive enough to elicit the praise of the Hellenistic poet Kallimachos. The long interior had wooden coffers adorned with bronze fittings.

Aside from its unusual orientation, planned approach, and fine decorative program, the architecture of the Hieron included a number of unusual features that must respond to the needs of the Mysteries. Two long rows of marble benches supported by sculpted lion’s legs one stood along the side walls, affording seats for spectators and/or participants in the initiation ceremonies. The main cella leads to an apse at the southern end. In addition to the main door on the central axis, leading from the pronaos to the cella, two lateral doors provided access from the sides of the building. Just outside the eastern doorway, two stones were placed on either side of a torch base, an installation that led Karl Lehmann to propose a preliminary ceremony that included a confession of sins prior to the completion of the initiation rites. Inside the cella, evidence exists for both burned sacrifices and poured libations in the form of an eschara and bothros.

The date of the Hieron’s construction is somewhat problematic because we have clear evidence for multiple phases of construction and renovation. Phyllis Lehmann discerned the foundations of two apsidal predecessors beneath the curved foundations of the Hellenistic structure, but these are probably related to the present structure. According to Lehmann, it was begun in the late fourth century, c. 325 BCE, although other scholars place the building in the early third century. There is clear evidence that the porch was added at a later date from the main building. Major renovations took place in the Imperial period, c. 200 CE. Five of the columns belonging to the porch were re-erected in 1956, giving today’s visitors an evocative glimpse into what an ancient viewer must have seen.

In the vicinity of this building, the Lehmanns found an inscription forbidding the uninitiated to enter “to hieron.” Working with a passage from Kallistratos using the same descriptive language, they determined the name of the building to be the Hieron. Given the unusual configuration of the structure and its obvious emphasis on communal gatherings, scholars have proposed that perhaps it was the site for the second stage of initiation, known as theepopteia.