Lamps and torches were the primary sources of illumination after nightfall in the Sanctuary. Necessary features of every lamp include a filling hole for oil, a chamber to hold the oil, and a hole for the wick. Of the surviving lamps from Samothrace, inexpensive, locally-produced lamps thrown on a potter’s wheel such as the lamps included here are the most common, suggesting that local lamp production satisfied the principal needs of the Sanctuary. Each of these lamps shows signs of burning around the wick hole, demonstrating that they had been used in antiquity. 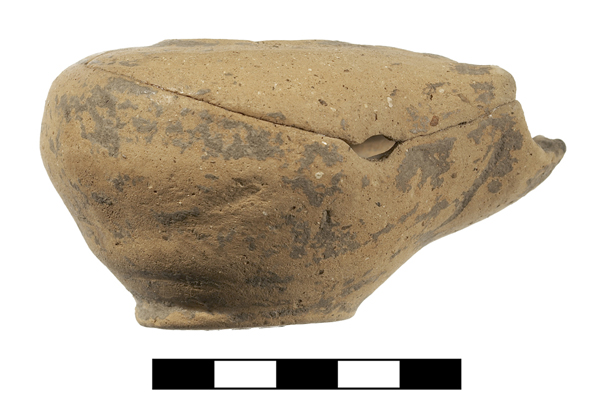 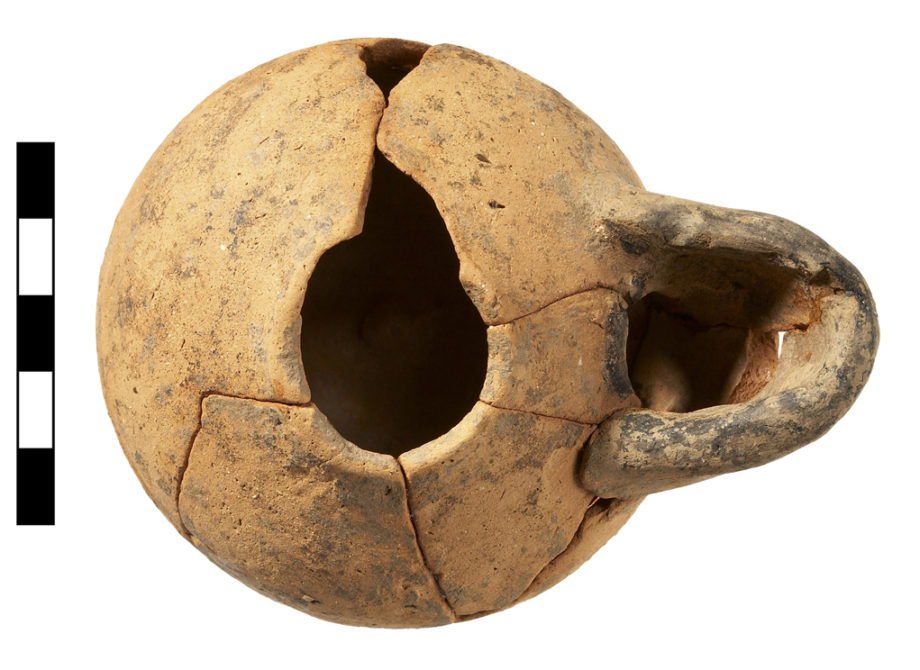 Testimony from ancient authors suggests that the rituals of initiation into the Mysteries likely took place at night. Judging from the number of lamps that have been found in the Sanctuary, it seems that initiates may have had their own lamps to light the way as they navigated the path of initiation from the Propylon of Ptolemy into the Theatral Circle, down the Sacred Way, and into the heart of the Sanctuary. The discovery of these substantially intact lamps, along with several others, in destruction debris on the floor of the Theatral Complex, evokes the idea of a nocturnal, sacred ceremony abruptly cut short. 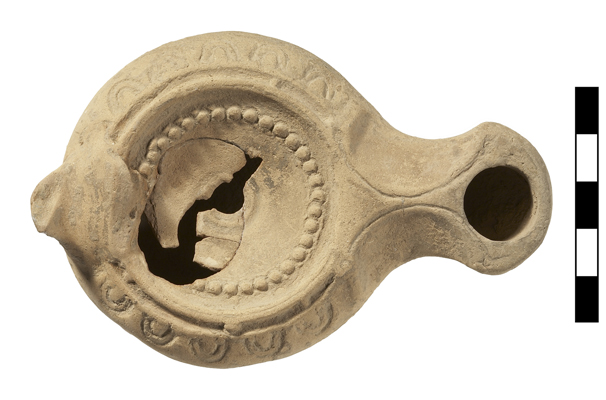 This well-preserved, moldmade lamp was discovered in the debris from the destruction of the Theatral Complex. In the early 3rd century B.C., lamp makers began to produce lamps by pressing the clay into two-piece molds. Moldmade lamps generally have wider shoulders than those made on a potter’s wheel, making it easier to decorate the upper surface. The decoration surrounding the small central fill hole of this lamp consists of concentric rings of geometric decoration.

Visitors to sanctuaries throughout the Greek world used lamps not only for the practical purpose of illumination, but also as dedications to the gods. It is possible to imagine that one of the many prominent initiates into the Mysteries might have brought their own lamps to use during initiation or leave behind as offerings to the Great Gods. Perhaps the Greek letters sigma tau (ΣΤ) inscribed on the bottom of the lamp refer to the owner of the lamp, or, alternatively, to the manufacturer. 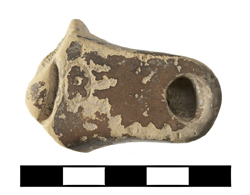 Although only a fragment of this moldmade, black-glazed lamp survives, it is possible to understand something about its function from the inscribed Greek letters theta epsilon (ΘΕ) scratched into the glaze beside the wick hole. The letters ΘE are an abbreviation for Theon (ΘΕΩΝ), a form of the Greek wordTheoi, or gods. These two letters identify this particular lamp as the belonging to the Great Gods. Its status as property of the Great Gods strongly suggests that Sanctuary officials or initiates used the lamp in connection with the rites. Although much about the Mysteries remains unknown, light certainly played an important role, because the initiation seem to have been held at night and at least one epitaph of a Samothracian initiate records that viewing a sacred light was part of his experience of the Mysteries

While this particular lamp is most likely Hellenistic in date, identification of pottery, lamps, and roof tiles as property of the gods by stamping or incising them with a Θ or ΘΕ began as early as the 5th century B.C. in the Sanctuary.