by samothraceadmin
6 years ago
154968 Views
0 Comments 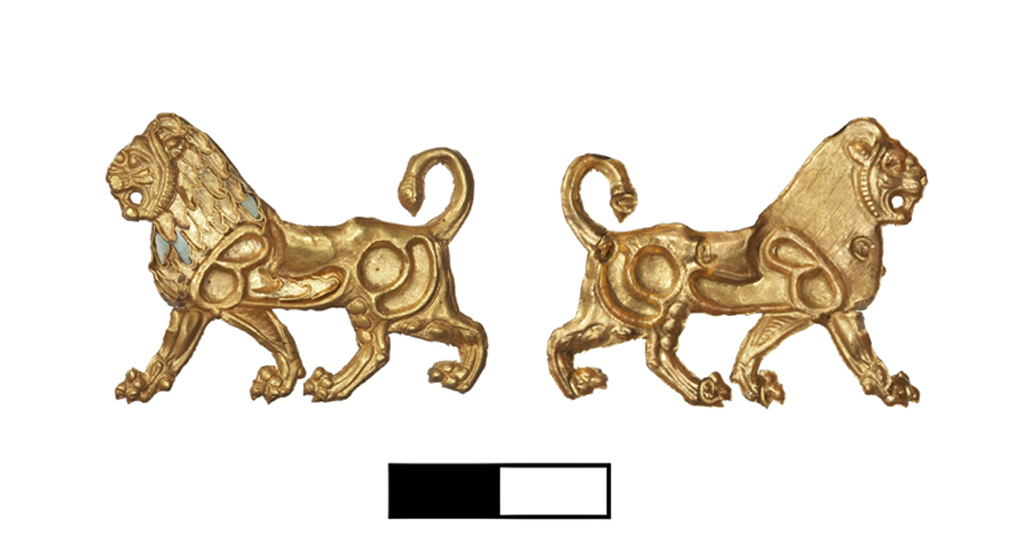 One of the finest objects found on the Eastern Hill, this appliqué takes the form of a striding lion. It was made from a thin gold sheet hammered in repoussé. Articulated spaces throughout the mane, shoulders, belly, and haunches indicate that the entire body of the lion was meant to receive inlays. Three turquoise paste inlays are preserved in the area of the mane. Eyelets on the back allowed for the appliqué to be sewn onto a piece of cloth. Similar lions form a decorative border applied to a horse-cloth found in Kurgan 5 at Pazyryk (Siberia) and on representations of such fabrics on the monuments at Persepolis.

The lion from Samothrace must have been made in the same workshop as two other lions of similar scale and style found in the Sanctuary of Zeus at Dodona. A gold wing from a creature created in the same materials, style and technique, now in Ioannina, may come from the same tradition.

P. Amandry has assigned the lions from both Samothrace and Dodona to the early fifth century, but J.R. McCredie has proposed that they belong instead to the second half of the fourth century. If so, the lion may have come into Greece along with other spoils from Alexander’s eastern campaigns, perhaps as a votive offering to the Great Gods from a returning soldier. 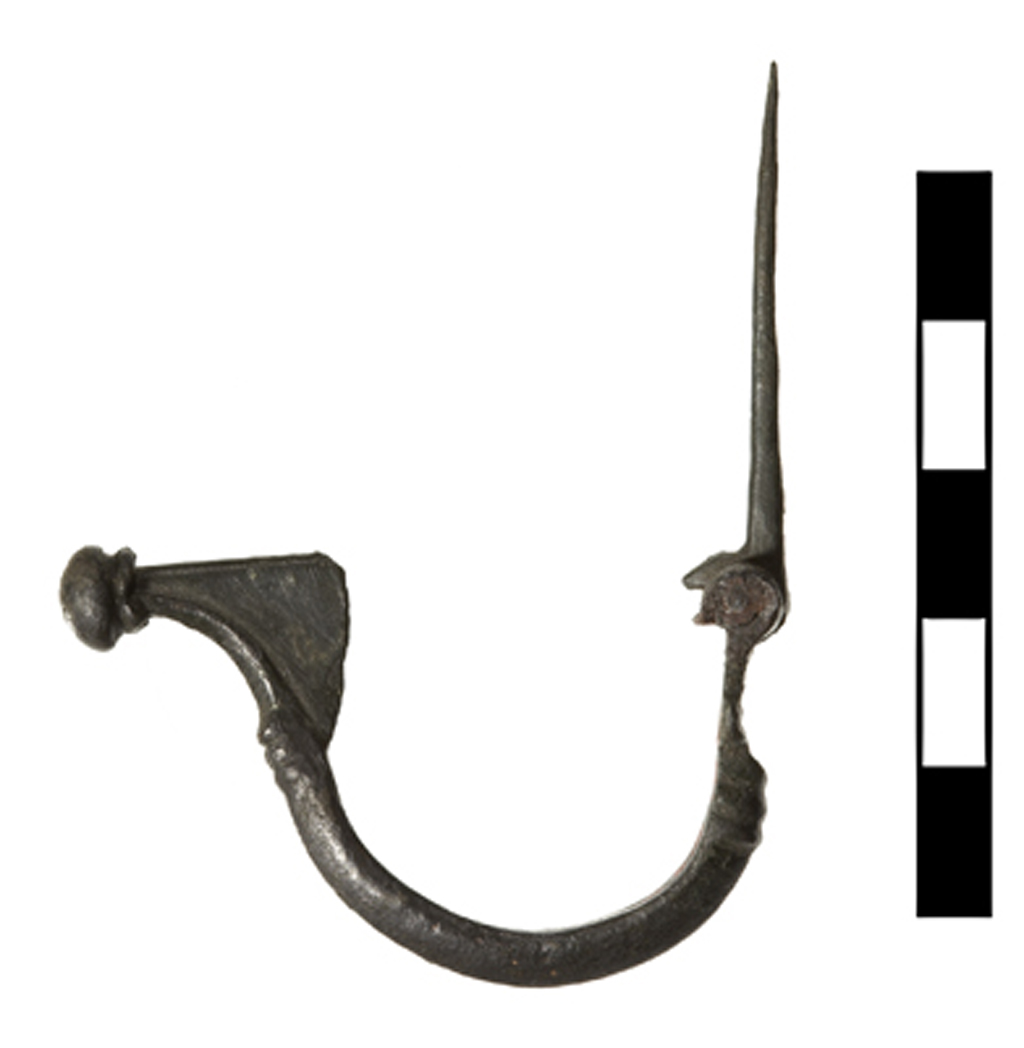 This bronze fibula belongs to the type known as ‘Aucissa,’ which has connections with pins found in the Northern Balkans, the Rhineland, Gaul, and Spain. J. Gaunt suggests a possible connection between this object and several initiates from Pannonia (in present-day Hungaria, along the Danube river), although he notes that offering personal jewelry to the Great Gods does not seem to have been common in the Sanctuary. Regardless of whether it was intentionally dedicated or accidently left behind, the presence of this bronze pin (like the gold Achaemenid lion) attests to the popularity and international character of the cult in the Roman period. 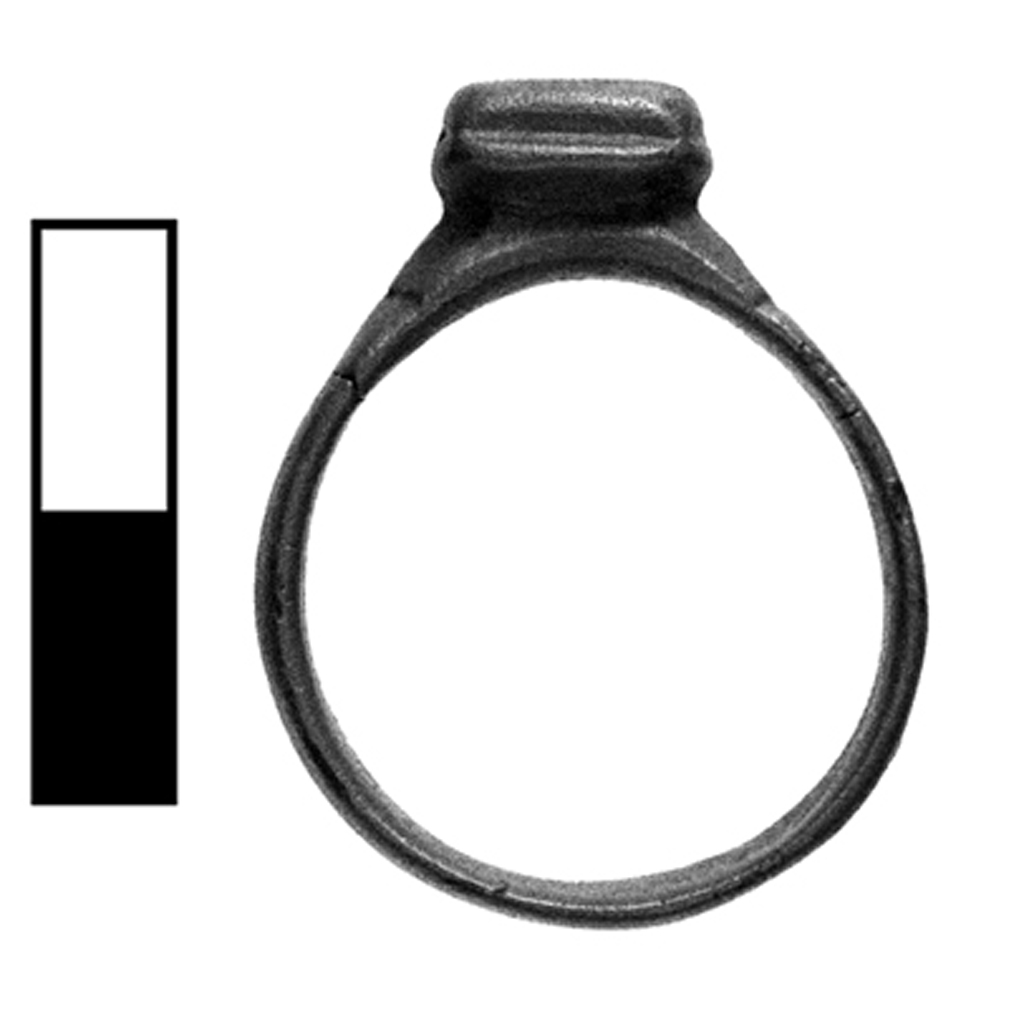 This simple iron ring has a rectangular bezel with rounded corners. Two iron rings were found in the vicinity of the Eastern Hill. They provide welcome archaeological evidence for an important feature of the Mysteries recorded in literary sources (Lucretius 6 1044-47; Pliny, Nat. Hist. 33.1.23, cf.Samothrace, vol. 1, pp. 96-97, nos. 212-213), which note that an iron ring was a token of initiation. The quasi-magical status of magnetized iron must have been one of the attractive features of these rings, making them powerful mementos of the rites of the Mysteries for those who had been initiated. 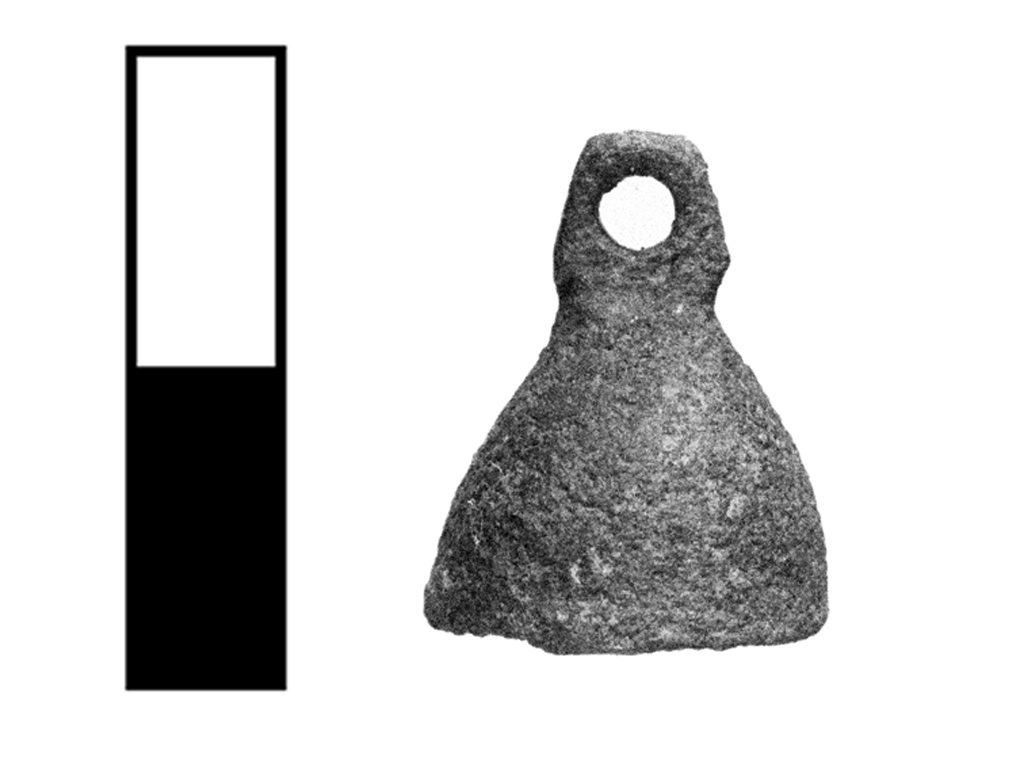 This miniature bell was suspended by the small hook at the top. The moving part that strikes the interior surface and makes the resounding ring, known as the clapper, is made of iron. Bells similar to this one were frequently dedicated in Greek sanctuaries, including at least one other site sacred to theKabeiroi, at Thebes. This kind of object adds an auditory dimension to our understanding of the experience of initiation, reminding us that sound surely was an important part of the mysterious rituals. According to the historian Apollodorus (Schol. Theocritus 2.36), the sound of bronze bells ringing had an association with purity, which would have been an ideal connotation for ritual objects within a sacred space, such as on the Eastern Hill, which lies just inside the limits of the Sanctuary of the Great Gods. 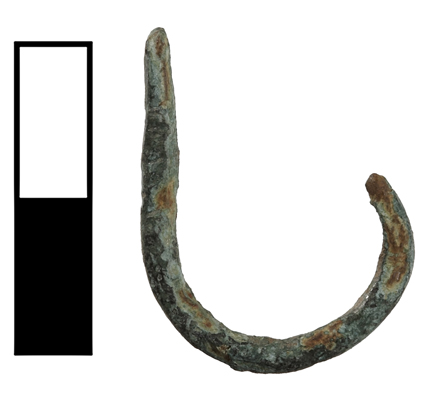 This fish-hook may represent the most humble of the votive offerings dedicated in the Sanctuary. Even among similar types of objects, this hook is simply made, with a point at the tip of the curved end and a notch at the top of the vertical element for attachment. Literary sources tell us that one of the promises of initiation into the Samothracian mysteries was delivery from peril at sea (Schol. to Aristides Oratio 13; Samothrace, vol. 1, p. 73, no. 158). Fish-hooks and other seafaring paraphernalia have been discovered in other Greek sanctuaries, suggesting that sailors may have left them as a token of gratitude for safe passages. The simplicity of this dedication reminds us that the gesture of leaving offerings and tokens of appreciation in honor of the Great Gods may take many forms, from the mundane to the grandiose according to the wealth and status of the donor.

This pointed lead spike bears an inscription, “MH.” This object may belong to the tradition of ritual cursing, a custom that is confirmed by a lead curse tablet found in the Samothracian Necropolis. The action of cursing seems to have involved binding, nailing, and burying the inscribed text. 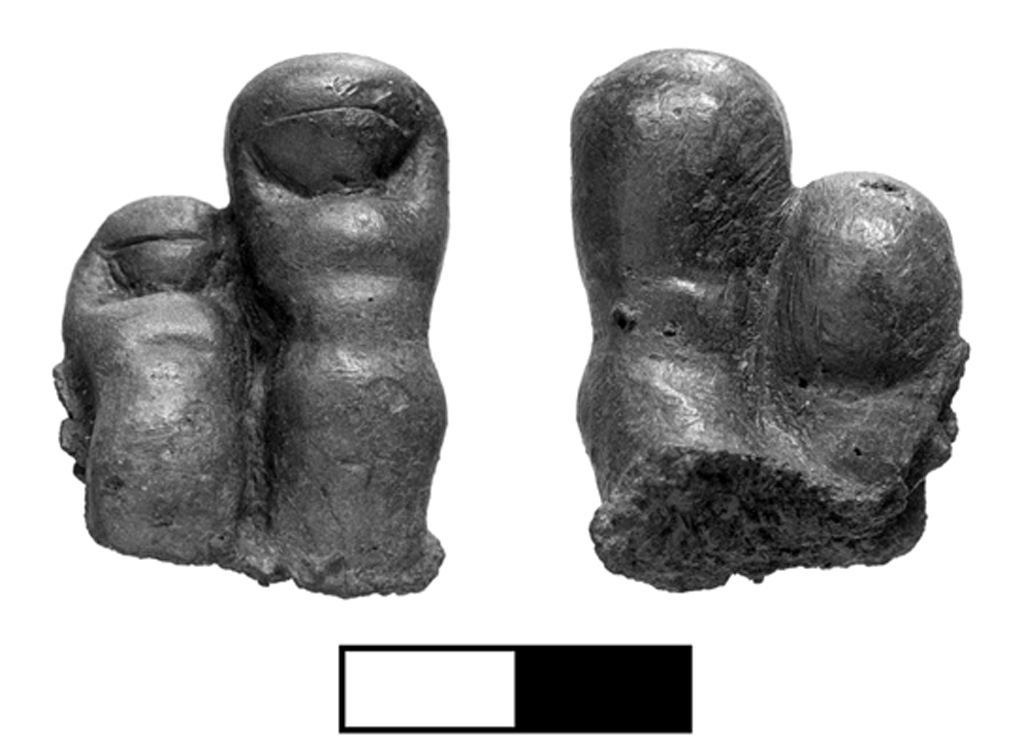 These two well-preserved bronze toes and a small fragment of a third one to their left are the second, third, and fourth toes from the proper left foot of a life-sized, or slightly under life-sized, statue of a man. A few toes, eyelashes, scraps of drapery, and dozens of statue bases bearing the imprint of feet are virtually all that remain of the many bronze statues that once stood along the western perimeter of the Theatral Circle and bore witness to the initiation rituals that occurred on the Eastern Hill.

Following the catastrophic earthquake that destroyed the structures in this area of the Sanctuary, it seems that the bronze statues were removed from their bases for the purposes of recycling their valuable materials into other usable objects. The surviving bits of metal from these monuments represent the small fragments that may have fallen off during the salvaging efforts. Although the sculptures and their identifying inscriptions are not preserved, even these very fragmentary elements help us to understand the gender, scale, and poses of the many bronze figures that collectively were a prominent features of the Eastern Hill complex in antiquity.

This bronze tassel likely formed part of the drapery of one of the bronze statues atop the monument platforms that overlooked the Theatral Circle. Its striated and twisted appearance indicates that it imitates fibers and may have formed part of a belt from the garment of one of the numerous bronze statues that once stood in this area of the Sanctuary. Figures wearing drapery with tassels are known from archaeological finds from other sites as well as literary references, such as the mention in Book XIV of Homer’s Iliad of a girdle with 100 tassels. 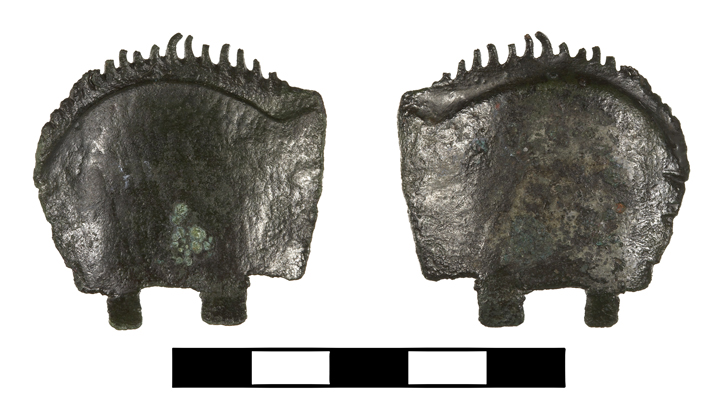 These two eyelash plates come from two different bronze statues that originally stood on one of the monument platforms overlooking the Theatral Circle. The first (65.0916) lacks the strong curvature of an upper eyelid, which suggests that it formed the lower lid, possibly of a proper right eye. The lid and the eyelashes were made separately and joined together. The entire element was then attached to the rest of the sculpture with the wide hook at the back.

The second example (65.0541) was made in the same way and also belongs to a lower eyelid, although it probably forms part of a proper left eye. Here, the lid is attached with two insertation tangs, rather than a single wide one.

These eyelashes are but two of at least 17 similar elements found on the Eastern Hill. Like the bronze toes and monument platforms found in the same area, they suggest the presence of many life-size, or nearly so, bronze figures in this part of the Sanctuary, a prominent feature that otherwise was lost when the sculptures were dismantled following the ruinous earthquake in first century AD.