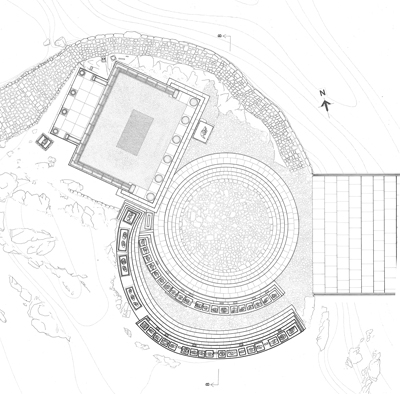 The Eastern Hill was an important locus for sculptural dedications within the Sanctuary of the Great Gods.  Just beyond the concentric steps of the Theatral Circle, on its southwestern perimenter, two sweeping arcs, one composed of  Monument Platforms and the other formed by a Stepped Retaining Wall framed the complex from the Dedication of Philip III and Alexander IV to the stepped ramp of the Propylon of Ptolemy II.  An impressive unified whole, the larger complex is a product of accumulation over time.  The first concentric arc was composed of sixsequentially built platforms, which served primarily as the bases for life-sized bronze statues and stelai.  The individual platforms were made in rhyolite tuff, friable coquina, limestone, and the distinctive red andesite porphyry.  In the late Hellenistic period, a new outer grandstand was formed with the addition of the Stepped Retaining Wall.  This nonconcentric structure, made of fossiliferous limestone on top of andesite packing, swung around from southern side of the Dedication in southeastwardly direction.  The structure added grandstands for as many as  220 more visitors within the complex, although their view of events in the Theatral Circle would have been restricted by the statues on the earlier Monument Platforms.  Responding to the natural landscape, the Stepped Retaining Wall has four steps on the north side, while rising to six steps on the south.  Like the lower tier of Monument Platforms, the Stepped Retaining Wall also carried sculptural dedications, including larger groups set on orthostate bases, on its upper level. 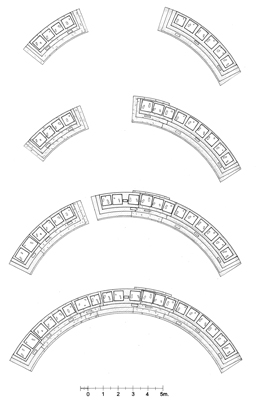 Over 22 simple statue bases with foot-shaped and/or rectangular cuttings for the insertion of a bronze statue indicate that numerous life-sized bronze statues once populated this place. The majority appear to have been male.  Precious little of these statues remains today, but the bases combined with small finds, including fragments of sculpted bronze toes and eyelashes, allow us to reconstruct something of their appearance and placement.  These motionless, life-sized standing figures served as dedications to the Great Gods, as a welcoming audience for those entering the Sanctuary, and as permanent witnesses to the rites that occurred in the Theatral Circle. Their presence reinforced the ceremonial nature of the place and gave visual continuity to the past, present, and future gatherings of initiands in the Theatral Circle. 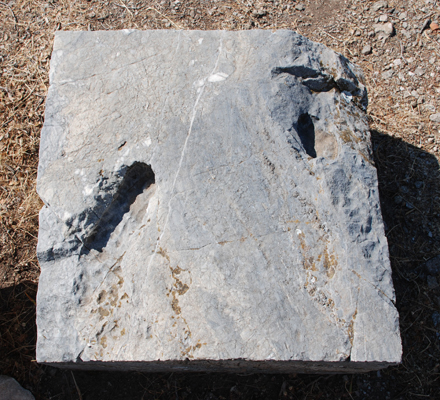 Wescoat, B. D. 2006. “Recent Work on the Eastern Hill of the Sanctuary of the Great Gods, Samothrace,” in Mattusch, C., A. Donahue, and A. Brauer, eds. Proceedings of the XVI International Congress of Classical Archaeology, Boston, August 23-26, 2003.  Common Ground: Archaeology, Art, Science, and Humanities. Oxford, pp. 79-83.