Passage and Perception in the Sanctuary of the Great Gods, Samothrace: Visualization and Animation 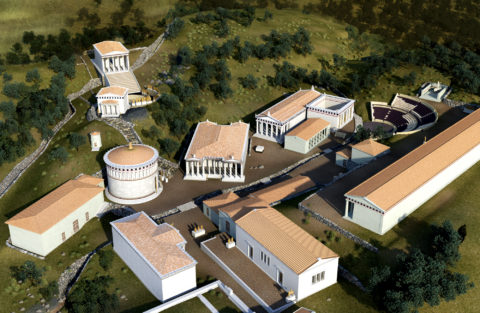 In the Sanctuary of the Great Gods on Samothrace, we have mined the innovative potential of three-dimensional digital modeling to document, analyze, and communicate the complex spatial relationships that bind place, architecture, and ritual in this famous yet elusive mystery cult. Although the rites of initiation remain secret, the physical environment of the site and the perceptions of pilgrims moving through it provide rich evidence for understanding the Samothracian cult. With the support of the National Geographic and in conjunction with their feature article on ancient Greek mystery religion (June 2016) , we will pursue four initiatives that will make essential improvements to our original 3D model of the Sanctuary of the Great Gods on Samothrace, created between 2008-2011: 1) sharpen the quality of the digital terrain model (DTM) using photogrammetry and enhanced textures, and reconstruct additional architectural features based on recent research; 2) deepen understanding of sacred space and ritual action by reconstructing the pilgrims’ experience inside the cult buildings; 3) demonstrate the phased development of the Sanctuary; and 4) exploit the model as a research tool to investigate the situation and visibility of famous monuments such as the Neorion and the famous Winged Victory.

By tracing the path of the initiate virtually, we aim to demonstrate to a broad audience how the nexus of architecture, environment, and human action shaped ancient Greek sacred experience. Following its use by National Geographic, the animations will be put on permanent display in the newly renovated Samothrace Archaeological Museum (projected reopening, summer of 2017).