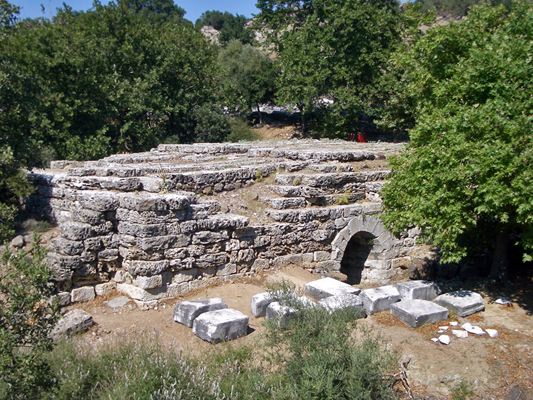 The Propylon of Ptolemy II served as the gatehouse into the Sanctuary of the Great Gods.  Located along the eastern boundary of the Sanctuary, this monumental entryway bridged the ravine of a seasonal torrent and directed visitors into the Sanctuary, marking the transition from unconsecrated to sacred space.  The gatehouse stood at the highest topographical point in the Sanctuary.  It was therefore visible from the northern shore of the island, as well as the southern gate of the ancient city, which was located northeast of the Sanctuary.  Inscriptions on the epistyles of the east and west facades of the Propylon proclaim, “King Ptolemy, son of Ptolemy and Berenike the Saviors, to the Great Gods,” indicating that Ptolemy II Philadelphos commissioned this monument during his reign over Egypt from 283-246 B.C. 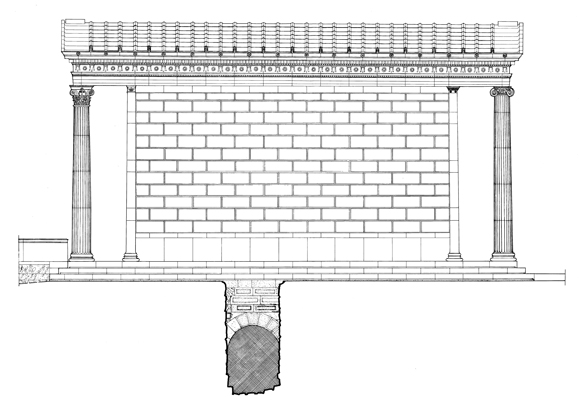 The substantial limestone substructures, which are visible today, originally supported a Thasian marble building with two sizeable pedimented hexastyle porches on either side of a double doorwall wall pierced by a narrow entrance passage.  On the east side nearest the ancient city, the porch is constructed in the Ionic Order, while on the west side it is Corinthian.  The column capitals were carved of Proconnessian marble.  In addition to the inscribed epistyle, the entablature included a frieze decorated with bukrania decorated with knotted fillets and rosettes approximating libation dishes, symbols of  sacrifice and libation, as well as a course of dentils. 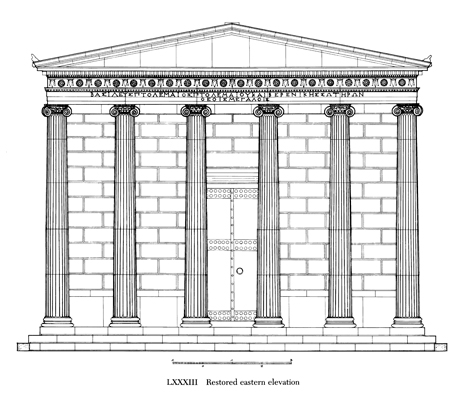 When the Propylon was constructed, the builders erected a diagonally oriented barrel vault that re-routed the nearby torrent so that stream, which formed the natural boundary of sacred space, would flow directly beneath the building.  This feat of engineering harnessed the natural environment in order to meet sacred necessities: visitors literally crossed over the boundary to enter the sacred precinct as they passed through the Propylon.  The remains of a staircase on the southern side of the interior door wall of the Propylon gave access to the attic.  We remain uncertain as to the purpose of this staircase.  Did it function to allow for pilgrims to experience some sort of event from above, perhaps noises or calls, as another way of marking their passage into the sacred space of the Sanctuary?  The difference in architectural order on each side of the building likewise served to mark the transition from profane to sacred space.  When entering the Propylon from the ancient city, pilgrims passed through an Ionic porch, while they exited into the Sanctuary through a Corinthian porch.  Not only was the mixing of orders novel, but up until this time, the Corinthian order had also been 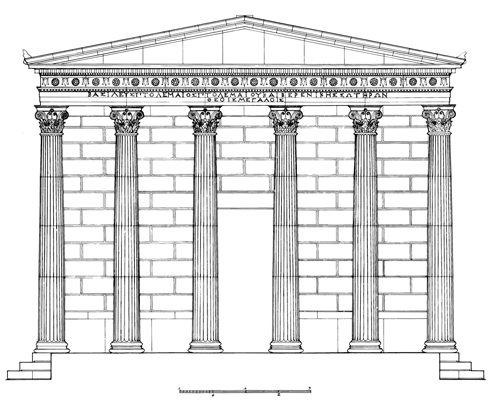 reserved chiefly for interiors.  Here, structural Corinthian columns are employed monumentally and on the exterior.  Conceptually, the Corinthian order may have also signaled to visitors who passed through the gatehouse that they were now inside the Sanctuary, a distinctive space in its own right.

Frazer, A. K. 1990. Samothrace.  Excavations Conducted by the Institute of Fine Arts of New York University. Volume 10, The Propylon of Ptolemy II, Princeton.