Built between 288 – 270 BC; dedicated by Arsinoe II of Egypt
Thasian marble structure on limestone foundation
Diameter 20.219 m (across the euthynteria), Height 12.65 m 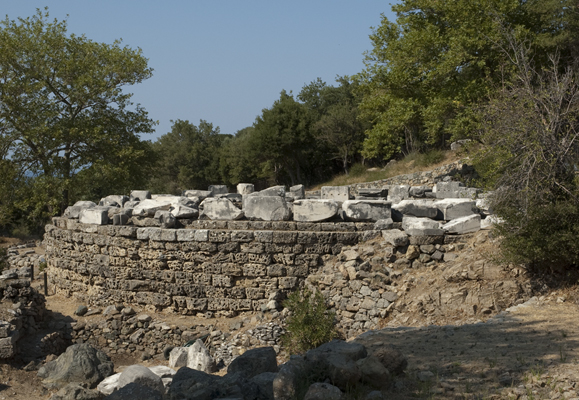 The Rotunda stands to the north of the terminus of the Sacred Way, between the Hall of Choral Dancers and the Anaktoron.  An inscription carved into the architrave above the door identifies the building’s dedicator as Arsinoe II of Egypt. However, the section of the inscription naming her husband does not survive.  Scholars are therefore divided as to whether the building was constructed when Arsinoe was married to her first husband, King Lysimachos of Thrace (between 288-281 BC), or to her third husband, Ptolemy II (after 278, and certainly between 273 and 270 BC). 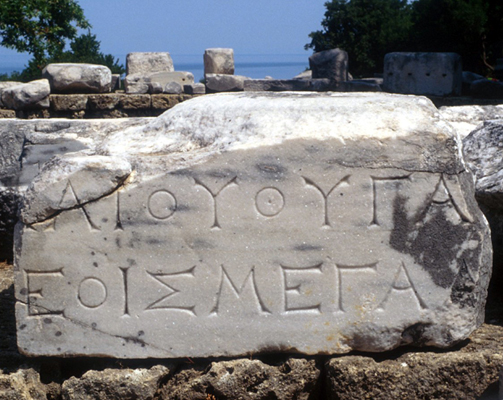 If the former, the building would stand as a monument to Ptolemaic alliances with Thrace and the northern Aegean.  If the latter, it most likely was given in gratitude for the protection Arsinoe received on Samothrace after fleeing from her second husband, Ptolemy Keraunas.  The function of the Rotunda remains obscure.  It might have been intended as a place for sacrifices and important gatherings during the festival. Walter Burkert raises the possibility that the rite of thronosis was enacted in the building. 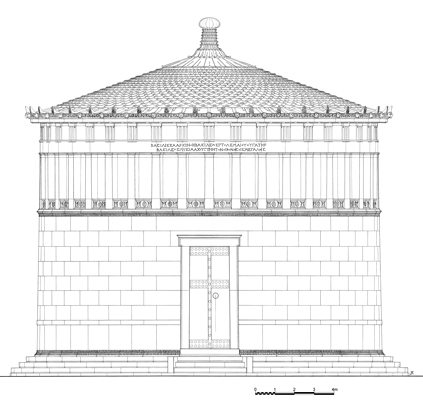 The Rotunda is the largest enclosed free space in a round building in the Greek world.  The building rests on a deep limestone foundation, while most of the superstructure is constructed in Thasian marble.  Above the foundation, a smooth, enclosed drum, making up roughly two-third of the building, supports a gallery formed by Doric pilasters on the exterior and Corinthian half-columns on the interior.  Between the pilasters are panels decorated with sacrificial imagery of bucrania flanking rosettes.  On the interior, the relief panels take the form of altars decorated with pairs of buchrania or pairs of rosettes.  The original conical roof was covered with scale-shapedterracotta tiles.  Following a massive earthquake in the Roman early Imperial period, the roof was converted to an octagonal shape and covered with a Corinthian tile system.  Whether or not the structure had windows in the gallery remains debated.  A single Doric doorway located on the southeastern side of the Rotunda, provided the only entrance.  The floor probably was made of earth, as no trace of pavement or under-pavement survives. 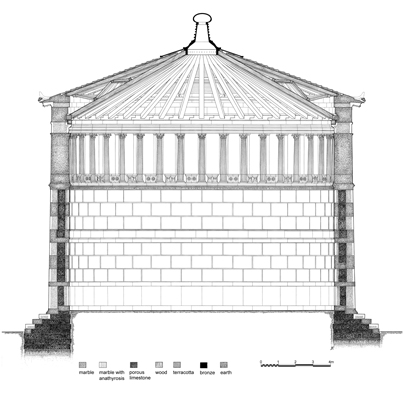