by samothraceadmin
6 years ago
154080 Views
0 Comments 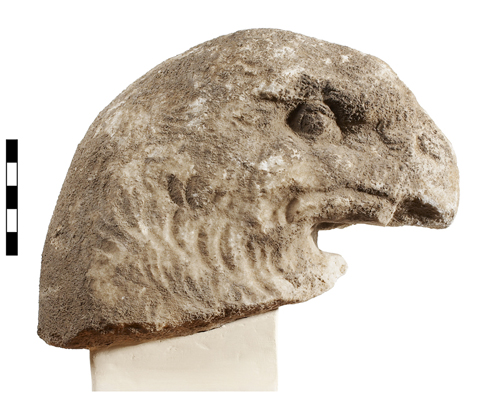 Fragments of a monumental eagle head and portions of the shoulder of two right wings indicate that at least two large marble eagles once adored the Eastern Hill. The head appears turned very slightly to the proper right. The right side of the head preserves 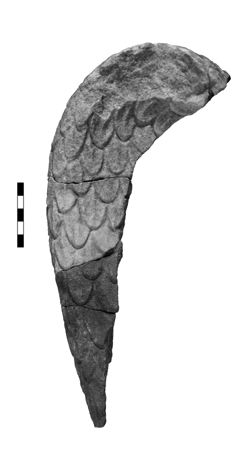 greater detail than the left side, which was either originally carved in less detail or is more heavily weathered, or both. The eye is set in a deep socket, and the eyelid is defined in sharp relief. The nostril is preserved as an upward-facing, incised crescent. A deeply incised groove delineates the separation between the upper and lower beak; it terminates in a depression at the corner of the mouth. Deep comma-shaped grooves framed by ridges indicate the feathering on the right side of the neck.

The similarity in carving of the feathers on the head and on the smaller fragment of surviving wing (65.0846/68.0465), indicated by two beveled edges with a central rib defined by an incised groove, suggest 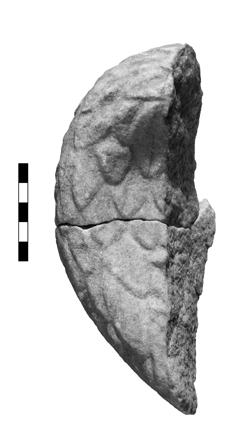 that these two fragments belonged to the same statue. The feathers of the other wing (65.0845a-c) differ slightly; they are formed by more sharply beveled edges and are divided down the spine by a raised ridge. This wing must be assigned to a pendant eagle.

Although the surviving evidence does not permit a certain reconstruction of the eagle or a definitive context, the presence of two eagles suggest they could be akroteria for the Dedication of Philip III and Alexander IV.  Other options include freestanding statues or attributes of a monumental marble sculpture.

Round Altar or Base 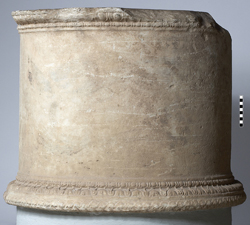 This block consists of a smooth, non-tapering cylindrical drum decorated with carved moldings at the base and crown. On the top surface, two small, rectangular dowel holes with the remains of pour channels indicate that an additional block rested atop the preserved crown. While the moldings are more indicative of an altar, the additional crowning block is more characteristic of a statue base.  The block has no immediate parallels in the Sanctuary; however, a similar but smaller ancient base, probably supporting a tripod, was reused as an altar support in the church of Ai-Giorgis ston Katsamba on the western side of the island.  Nevertheless, given the many statue bases on the Eastern Hill, all of which are rectangular, it is perhaps more likely to understand this piece as a small altar.  The entrance complex on the Eastern Hill would be a likely place to make preliminary sacrifices and offerings in advance of proceeding into the main Sanctuary.

Torso from a Statuette 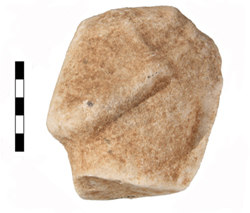 This marble statuette of a male, like its many terracotta counterparts of both males and females found in the Sanctuary, was most like an offering to the Great Gods. Only the upper torso survives; the position of the right arm, bent up across the chest, is clear. Other features include the poorly preserved right hand and several folds of the figure’s mantel. Several well preserved terracotta male figurines from the South Nekropolis give a sense of the appearance of the body in this format (Samothrace 2, pp. 882-883, nos. SP1-7A and SP1-7B).