by samothraceadmin
5 years ago
155390 Views
0 Comments

Surviving almost completely intact, these draped female figurines each wear a chiton and himation, the inner tunic and outer cloak worn by both men and women in the ancient Greek world. Each figure stands elegantly with her weight on one foot and hip gently splayed, with one arm bent in front of her body and the drapery extending all the way to the ground. If fully preserved, they would be between ten and twelve centimeters tall. This type of draped female figurine is called a Tanagra figurine, after the city in Boeotia (Central Greece) where thousands of similar statuettes have been discovered. Today, we refer to these two figures as the “Green Girls” because of the green pigment that remains on their garments, reminding us of the Greek tradition of painting statues and figurines, although such coloring rarely survives for us to see today.

It is possible to date the “Green Girls” prior to 323-317 B.C. because archaeologists discovered them sealed on and near the floor of the Fieldstone Building beneath the Dedication of Philip III and Alexander IV. They are, therefore, some of the earliest examples of the popular Hellenistic Tanagra figurines. While their precise function is unknown, their findspot suggests that they may have been displayed in the Fieldstone Building.

Head of a Female Figurine 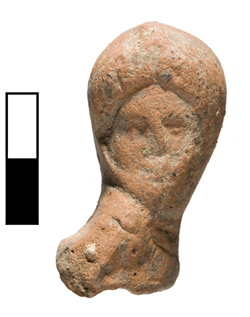 This veiled head of a female, which was part of a terracotta statuette, most likely belongs to a type of figurine called a mantle dancer.  Female dancers wrapped themselves in a thin mantle called a himation, often drawn over the head as a veil and sometimes also covering the lower part of the face. The head of this dancing figurine tilts to the right as she lifts her right arm and draws the drapery up to her chin. Such dances were performed in religious and theatrical contexts. Although found primarily in graves during the Hellenistic period, a number of the mantle dancer figurines have also come from sanctuaries. Ancient sources have associated the mantle dance with seasonal festivals to Cybele, Demeter, Dionysus, and Adonis.  Later Roman depictions show veiled dancers specifically connected to the mystery cult of Demeter and Kore at Eleusis, leading scholars to make a connection between the veil, purification, and secrecy. Such associations would have resonated with initiates who worshipped the Great Mother, a nature and fertility goddess later assimilated with the goddess Demeter, among others. Worship in the form of dancing may have evoked mythic parallels with the Korybantes, daimones believed to take part in dancing in honor of the Samothracian gods. 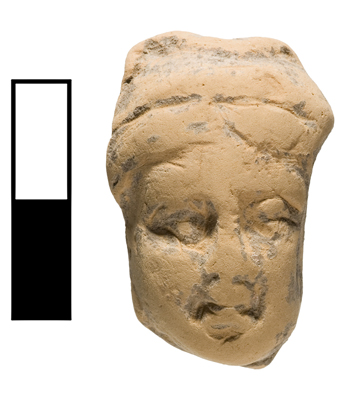 Excavators have retrieved two fragments of terracotta hydriaphoroi, figurines of women carrying water jars, from the Eastern Hill. One fragment (66.0533) shows a figure with hair parted at the center and brushed back to frame the exaggerated features of the face. A hydria, or vessel designed for carrying water, would have been attached on the now broken surface at the top of the figure’s head. A thumb print of the craftsman who pressed the clay into the mold is preserved on the inside of the head. A second fragment (66.0467) preserves part of the left side of another water-carrier, including part of her veiled face, the bottom of her vessel, and one arm bent beside her body. The right arm would have extended up to secure the hydria in place.

Numerous water-carrying figurines have also been unearthed in the Sanctuary near the Propylon of Ptolemy II. Such figurines may reflect the practice of carrying water for use in purification ceremonies or other cult rituals. Although water-carriers were common types during the Hellenistic period, they seem to have been particularly important in fertility cults such as that of Demeter and Kore at Corinth, perhaps referring to bathing performed in bridal rituals. Ritual bathing of a bride may have held special meaning for initiates into the Mysteries who celebrated the sacred union of Kadmos and Harmonia at the annual festival of the Great Gods at the Sanctuary. According to Diodorus the wedding of Kadmos, legendary founder of the city of Thebes, and Harmonia, daughter of Zeus and Elektra (daughter of Atlas and matriarch of the Samothracian mythical family) was the first to be celebrated on earth with the gods in attendance bringing gifts for the couple. 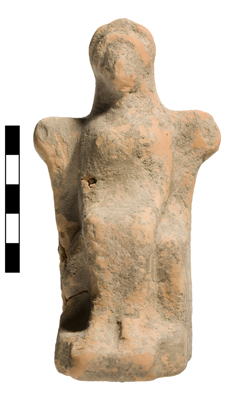 This seated female figurine is among the oldest of the terracotta figures found in the fill thrown into the Theatral Circle following the destruction of the region.  Rather than rebuild the monuments, the Samothracians simply pushed the destroyed structures into the Theatral Circle and covered it with some two meters of earth, stones, and debris to create a level area.  Among this fill are fragments of pottery that span from the Archaic period through the late 1stcentury A.D.

The figure sits on a throne, resting her closely-spaced feet on a stool and her hands in her lap. Her thick hair is arranged in an arch above her face, crowned by a stephane, a diadem or headdress that may have denoted divinity.  She most likely wears a heavy cloak known as a himation drawn up over her head.

This figurine seems to be a simplified, local version of a common type of seated female statuette made in the 5th or 4th century B.C. and found in abundance all over the Greek world. Figures of this type are found frequently in sanctuaries and shrines where worshippers dedicated them as offerings to the gods.

The top of this moldmade figurine from the chest to the head is solid, while the rest of the figure is hollow. Terracotta molds producing figures of this type seem to have had a long life. After repeated use, the details of the mold would have worn away, a result that may explain the lack of definition in the features of the figurine. Excavators discovered a similarly worn seated figurine dated to ca. 400 B.C. (57.174) in Tomb H8-5 from the Nekropolis in the vicinity of the Sanctuary.

Head of a God Based on Zeus Ammon 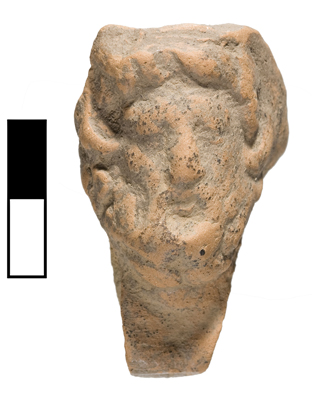 This small terracotta bust has the large, curling locks of hair, prominent nose and brow, and pair of in-curving horns or tusks projecting onto the cheeks that are typical visual characteristics of the hybrid Greek-Egyptian deity Zeus Ammon. Judging from the smoothly finished, concave back surface, it may have been part of a figurine or vessel.

Alexander the Great associated himself with Zeus Ammon. After the Egyptians welcomed him into Egypt as a liberator in 332-331 B.C., Alexander visited the oracle of the Egyptian deity Amun at the Siwa Oasis in the Libyan desert where, it is assumed, he received confirmation that he was the son of Zeus. After 331 B.C., Alexander referred to himself as Zeus Ammon and commissioned images of himself adorned with ram horns as a symbol of his divine ancestry. This figurine is most likely based on representations of Zeus Ammon found on bronze coins and popular with the Ptolemaic kings, the successors of Alexander the Great in Egypt.

Head of a Boy Wearing a Kausia 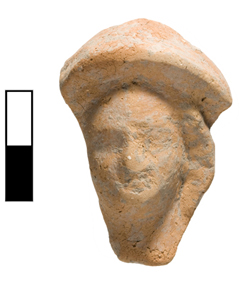 This terracotta head of a boy wearing a kausia, a flat, mushroom-shaped cap adopted by Alexander the Great during his travels in India and later associated with Macedonian military costume, would originally have been part of a full-length figurine of a standing youth with a cloak fastened on his shoulder.

This particular figurine likely was produced locally using a mold, but the boy with a kausia derives from a well-known type created in one of the major Hellenistic centers for Greek terracotta figurine production such as Athens, Myrina, or Smyrna. Similar figurines of boys wearing the kausia have been found in or near sanctuaries throughout the Greek world, where worshipers during the Hellenistic period routinely dedicated them as offerings to heroes and deities with connections to the underworld. The presence of this particular figurine in the Sanctuary along with others found in the vicinity of the Propylon of Ptolemy II is not surprising given the strong associations of the Great Gods with the earth, the underworld, and fertility.