The Theater at Samothrace not only served a vital role in the ritual and performance life of the Sanctuary of the Great Gods but also kinesthetically and programmatically connected the Central Sanctuary to the areas of the Stoa and Nike Monument. Set at the high, southern end of the Sanctuary, directly on the steep slope of the Western Hill, the Theater offered an expansive northward vista across the entire site. The Nike Monument which capped the rear koilon would thus have commanded an unhindered view over the entire Sanctuary and out to the Thracian Straights and the Thracian coast beyond. The position of the Central Ravine directly in front of the Theater, however, served as a natural boundary to the building itself, substantially limiting the area available for the orchestra and skene. 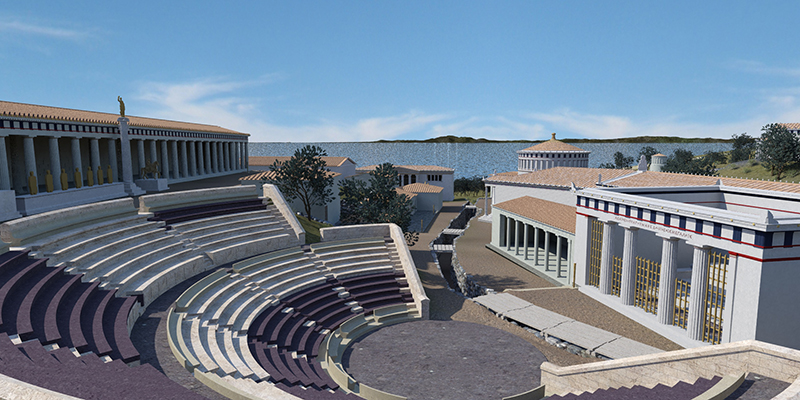 3D model reconstruction of the Theater, Stoa, and Central Sanctuary, from the South, © American Excavations Samothrace

Although first discovered and explored by Charles Champoiseau in 1891, it was only in 1923 that the theater was partially excavated by a team of French and Czech archaeologists, led by Fernand Chapouthier and Antonín Salač. Working on the site for four weeks, the team cleared a large area of the center of the koilon, with several rows of well-preserved, multi-colored seats, and located the diazoma and remains of 4 staircases, as well a large terracotta pipe that followed much of the arc of the diazoma. They drew a detailed plan, but did not fully connect it with the Nike Monument above and the Altar Court below. By the time Karl Lehmann arrived at the site in 1937, however, this evidence had largely vanished, leaving him to develop a reconstruction that suited his interpretation of the Altar Court but which later discoveries proved was topographically and architecturally unsustainable.

Surface cleaning for surveying in 2013 revealed that more vestiges of the Theater survived than previously supposed. Subsequent excavation in 2018 then allowed us to confirm the general accuracy of the French-Czech plan, establish the elevation of the structure, and secure its relationship to adjacent monuments. Most critical to this has been our work at the bottom of the Theater, near the Central Ravine. The space of the orchestra, it is now clear, was both larger and at a higher level than envisioned by Lehmann, featuring a diameter of approximately 12.50–13 m and set at ca. 38 masl. Due to space constraints, the construction of a temporary wooden skene would likely have overlapped the eastern edge of the orchestra, though the marble façade of the Altar Court across the Central Ravine would also have served as a splendid backdrop during performances. The building’s analemmata, moreover, were not set on the retaining walls of the Central Ravine, as proposed by Lehmann, but would have stood at least 4 m. to the west, allowing visitors to enter the Theater from the main valley. 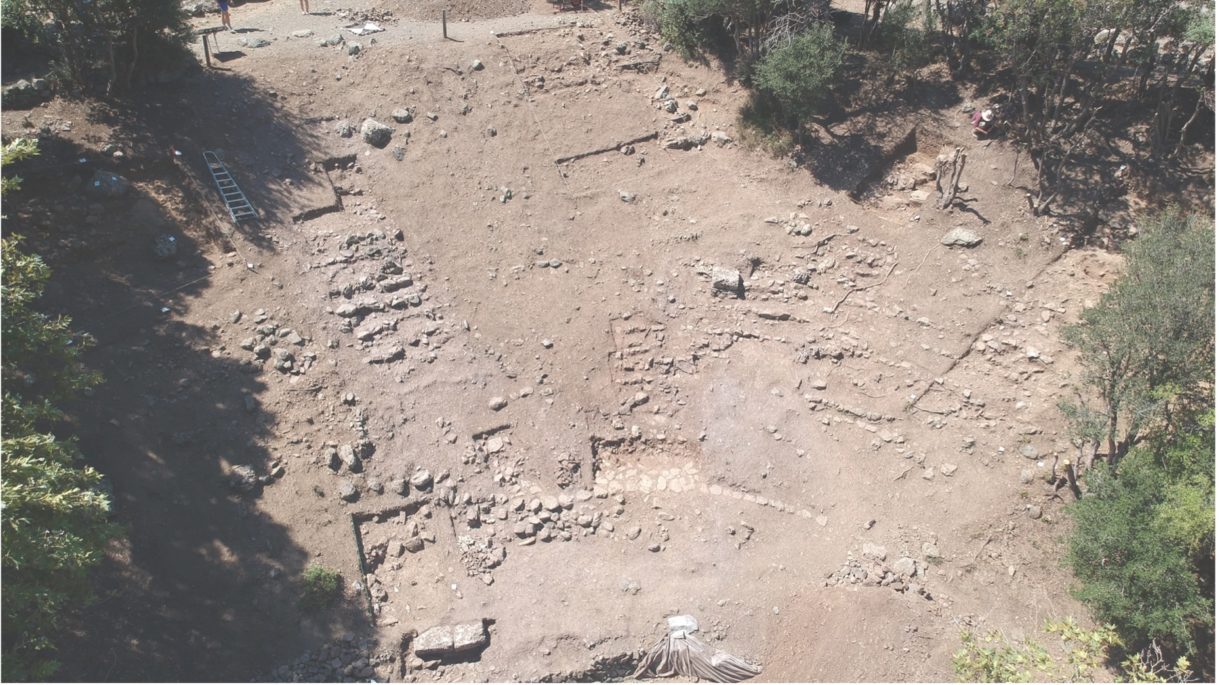 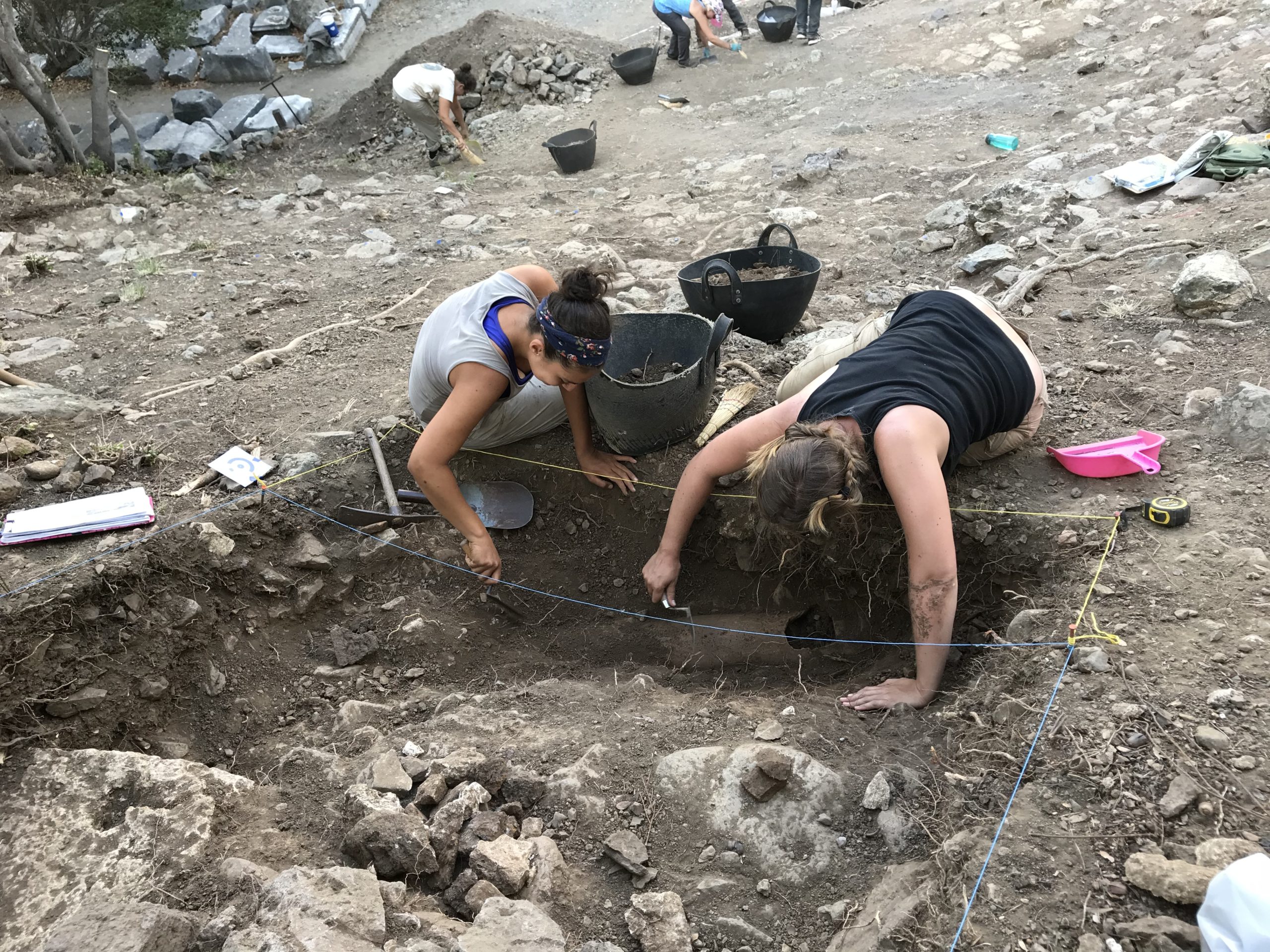 Excavating a water pipe in the Theater in 2018, © American Excavations Samothrace

Rising from the floor of the orchestra was a large koilon, which was divided into upper and lower sections by a single diazoma measuring ca. 1.30–1.40 m wide. At the bottom, a row of prohedria seems to have immediately surrounded the arc of the orchestra, followed by ten rows of bench-style seats in the lower koilon and six or seven in the upper. Throughout the building, these seats were variously constructed of red porphyritic rhyolite and white limestone, giving the entire Theater a polychrome appearance. The upper and lower koilons were, in turn, divided into ca. 30° kerkides (wedges) by staircases extending directly from the floor of the orchestra to the top of the hillside. The precise number of these kerkides and staircases remains somewhat uncertain, but the secure remains of four staircases indicate that there were originally at least five kerkides in both the upper and lower koilons.

Structurally, it is clear that the Theater was constructed in a single phase, but excavations have not yet provided solid chronological indicators. Relative elevations in the area, however, indicate that the building preceded the construction of the Nike Monument, while its placement and design clearly engage deliberately with the Stoa and the Altar Court: it gives meaning to the existence of the former and the westward orientation of the latter. Because these buildings were both in place no later than the middle of the 3rd century, it would make sense for the Theater to be contemporary.

Epigraphic evidence for honoring poets and playwrights, moreover, make it all but certain that the Theater was in place by the end of the 3rd century B.C.E. Decrees from around 200 B.C.E. which honor Dymas of Iasos and Herodes of Priene for performances retelling the legendary history of Samothrace, for instance, not only assist in reconstructing the Theater’s chronology but also indicate that the building most likely operated both during initiation rituals and during the island’s annual festival.