Over the last week we have spent much of our time on the site working with the surveyors, who are making a topographic map of the site, and the archeologists who are measuring the wall blocks sitting in the block fields. We started out surveying before we went up to Fengari and have resumed it since we all got back. Now we have also started to measure the wall blocks from the Hieron. These blocks are made of Thasian marble and were found in the Central Sanctuary. They are classified as Doric wall blocks, there are two kinds: stretchers and Binders. Binders and short and thin but have great depth, while the stretchers are tall but thick and have little depth. We are measuring these blocks so the Vikki, who is working on statistics, can identify what the unit of measurement was that the ancient Greeks used on this temple. We found the blocks width, height, and length. Some of the blocks have been lying in the same spot of the past 30 to 40 years so a number of them have been surrounded by a couple inches of dirt, making it hard to get to the measurements. We dug around the edges to get the heights. 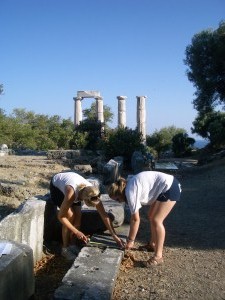 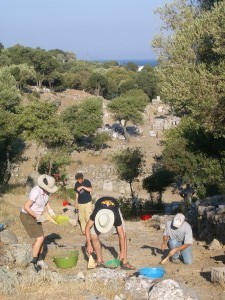 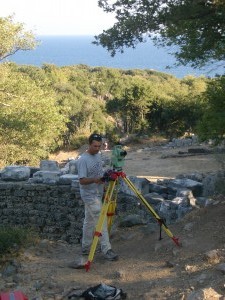 This two-word conversation is the call of the surveyors as they map the habitat around them. Surveying is a way to measure the shapes of objects, like retaining walls or the marble blocks that make up the Sacred Way in our case. Using some very expensive tools, the Total Station and the Statia Rod, we can ‘shoot’ the points we need from a fixed point down to the target, which is being held by another person. The person holding the Statia Rod has to hold the rod level and shout “ready” when they do so that the other person operating the Total Station can take the shoot and shout back “ok”. This is done over and over until at least a thousand points are recorded. Then they call it a day! Once we shoot all the points we want, the architects fix any mistake made on Photoshop to perfect the topographic map of the site. Each point and curve of each block is a point and it takes a large amount of time to measure each block one by one. There can be any where from 8 points on a block of double that for the larger ones.

The block measuring is now done and the surveyors have moved from the Sacred Way to the Milesian Dedication. The stones at the dedication were covered in dirt and weeds so we spent a couple days digging them out and brushing them off. The season is now coming to a close and everyone is hard at work trying to finish every last task. Many people have left so our numbers have been cut in half. Now we have 8 people left and we are cooking up a storm. Many peach cobblers have come out of our kitchen and in the next blog I will be posting some of our favorite recipes. Tomorrow’s blog will be the last for this summer and every one will say their good byes to the island. In the next couple days the last remaining people will leave including my family and I. Every one will miss this island immensely!